Exhibition: Somewhere in between 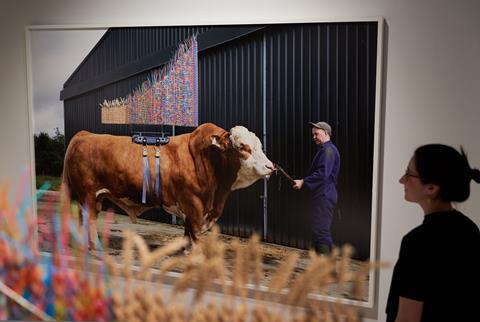 The exhibition brings together four installations, each created by a scientist–artist collaboration and part-funded by Wellcome.

My favourite was Sire – the brainchild of Dublin-based artist Maria McKinney, geneticist David MacHugh and veterinary scientist Michael Doherty. The display showcases a series of photographs of pedigree bulls taken at the Dovea Genetics stud farm in Ireland. Each bull wears a sculpture attached to a special harness on its back. The sculptures represent different aspects of breeding programmes, such as a three-dimensional production chart, pathogen or chromosome. They are impressive in their own right, and there are two you can actually look at up close in the exhibition space. Fittingly, they are made using colourful plastic artificial insemination straws, which happen to be just the right thickness to be wound together using traditional corn-weaving techniques. 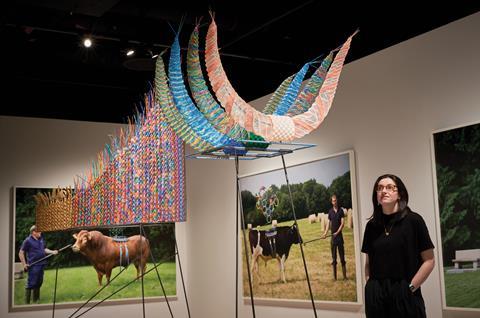 Across the exhibition beckons the blue zen-ness of Under. A collaboration between physiologist Kevin Fong and filmmaker Martina Amati, Under explores the practice of free diving, spending long periods of time underwater without breathing equipment. Within a darkened room, projected with three underwater films of free divers, each shot during the course of a single breath. Amati even trained herself to free dive and makes an appearance. It’s an immersive space, and again I was able to appreciate both the scientific and creative elements.

Two other films – Sensorium tests and At the threshold – explore the rare neurological phenomenon that is mirror-touch synaesthesia, where those affected have the ability to experience physical sensations of touch or pain on their own body when they witness somebody else experiencing them. They were produced by the artist and filmmaker Daria Martin collaborating with the psychologist Michael Banissy, who carried out the first laboratory studies with mirror-touch synaesthetes.

The fourth installation, the somewhat trippy Alien sex club, was not my cup of tea. A maze of vibrant, colourful artworks broadly themed around HIV, the interpretation explained it would translate the specialist terms ‘viral load’ and ‘pill burden’ and that vistiors would ‘emerge with a new vocabulary for talking about HIV’. But this didn’t work for me, and I thought the connection between the art and the underlying scientific ideas was weak.

One thing I really did enjoy was learning about how the installations were designed and put together. Each exhibit was accompanied by detailed explanations and audio interviews with their creators, which gave equal air time to the artists and scientists.

You could zoom through the whole thing in half an hour, or take a more leisurely approach. Either way, it’s worth a visit. Only got time to see one thing? Make it Sire.