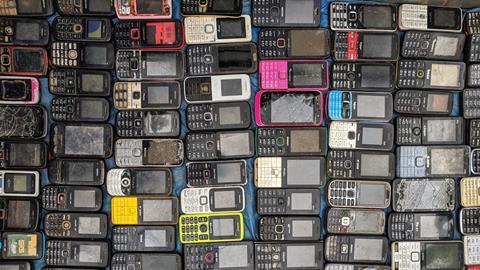 Much more effort needs to be made to recycle old gadgets in order to recover precious metals and other rare materials, the Royal Society of Chemistry (RSC) has said.

A survey of 2353 people in the UK aged 16–75 commissioned by the RSC, found that 45% of UK households are storing up to five unused electronic devices, including computers, mobile phones, tablets and e-readers. At the same time, 82% of households with unused devices have no plans to recycle them.

While 14% said they would sell old devices on, the majority (66%) said they intended to hang onto them as ‘spares’. In reality, the RSC warns, this means people could be building up a stockpile of old tech containing precious materials, including metal elements that are rare or from conflict regions. Indium, gallium, arsenic and silver, for example, all are used to make the electronic components within smartphones, but at currently usage natural supplies will run out within 100 years.

‘We are approaching the point of no return for some of these materials,’ the RSC’s chief executive Robert Parker said in a statement. ‘Over our lifetime, one person in the UK will produce around three tonnes of electronic waste. However, there are indications that number could increase as the number of smart, wireless or connected devices in the home increase.’

The survey revealed 52% of 16–24 year olds have 10 or more gadgets – both in use and spare – in their home, compared with 39% of 35–44 year olds and just 30% of 55–75 year olds. The RSC says as technology ownership grows, recovering the rare element components in waste electronics should be made a national priority, and that action is needed to make the recycling process easier. Around a third (37%) of survey responders who had hung onto old devices said fears around data and security put them off recycling old tech, and 29% said they didn’t know where to go to recycle items like this.

It is difficult to estimate exactly how many tonnes of individual rare elements may be locked up in e-waste, and how much financial value this might add up to. But the RSC says celebrations around the International Year of the Periodic Table provide an ideal opportunity to consider the value of scarce elements.

The organisation plans to publish a paper setting out recommendations to improve e-waste recycling later this year.