In US virtual cinemas | Streaming via Amazon.com

Spaceship Earth is an entertaining documentary that follows a group with an audacious ambition to create a self-sufficient dome in the Arizona desert that represents the entire planet’s ecosystem. Their plan was to then seal eight individuals inside for two years to examine the closed system and see if they could survive.

Like most of the UK, I currently find myself working from home, having entered week 12 of the lockdown and I cannot imagine agreeing to be isolated for two whole years. As I watched this documentary, I constantly drew parallels with the eight self-proclaimed ‘biospherians’ as I followed their journey inside Biosphere 2.

The story begins in the 1960s with the formation of the group, and follows these free-thinkers up to 1991, when the two-year mission began. The film itself is composed of old stock footage that was shot at the time, interspersed with recent interviews with some of the participants. I enjoyed this back and forth, as it meant you did not know how the story would end, and it was very interesting to hear people’s thoughts on events looking back. 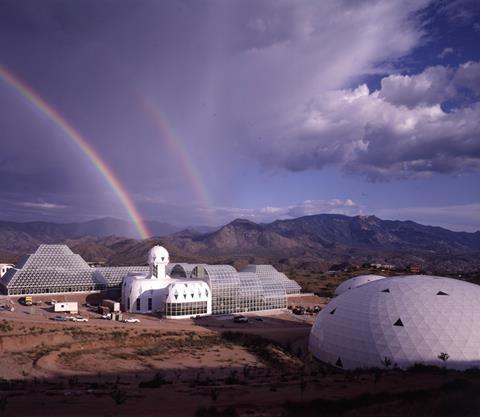 Biosphere 2 in the Arizona desert

While I was watching their story, I was at first struck by the enormity of the project they were undertaking. They believed the science that would come from the project could help with studies on sustainability, climate change and even interplanetary travel. However, no one on the team had ever done anything even remotely like it before – never mind on such a grand scale. They were essentially making it up as they went. Nor was there any scientific method or testing when they went about choosing the eight people who would enter Biosphere 2.

As the story played out, I felt like I was watching a car crash in slow motion, just waiting for it to all go wrong. – which eventually it did and in rather spectacular fashion. At one point the entire endeavour was labelled ‘trendy ecological entertainment’ by the media.

I don’t want to give the ending away because it was an extraordinary journey, and I wouldn’t want to spoil that for other viewers but it just shows how even those with the best of intentions can be waylaid. I found the film’s start a little slow but it does pick up when the biodome project begins. It’s a fascinating cautionary tale and well worth a viewing.