Genius of Britain. The scientists who changed the world

Genius of Britain. The scientists who changed the world 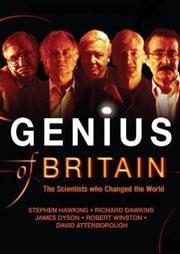 The Chambers Dictionary defines a genius as someone ’with consummate, intellectual, creative or other power’. This book, based on the Channel 4 television series of the same name shows that Britain has had more than its fair share of such people in the area of science and technology.

Genius of Britain  is not a transcript of the TV series, although it does contain some extracts from the television commentary by Stephen Hawking, Richard Dawkins, James Dyson, Robert Winston, David Attenborough and others. It covers a wider time period than the broadcast series, and includes the achievements of many more great British scientists, including several ?migr? scientists who made their most significant discoveries when working in Britain.

Genius of Britaincovers the achievements of nearly 80 people from the Middle Ages, through the Renaissance, the Industrial Revolution, to the Victorian Age and the accelerating pace of scientific discovery in the 20th and 21st centuries.

The book is well written for a general readership, free of technical detail, but strong on insight into the overall value of the people concerned and how they fit into the whole unfolding drama of scientific progress against the backdrop of historical events.

One meets the well known names like Newton, Davy, Faraday, Clark Maxwell, Darwin, Rutherford, Turing, Watson and Crick and Hawking, but there are also many less-known names such as Thomas Willis, Daniel Rutherford, Charles Barkla and Bill Hamilton; they all contributed to the story of British science.