Lives and times of great pioneers in chemistry: Lavoisier to Sanger 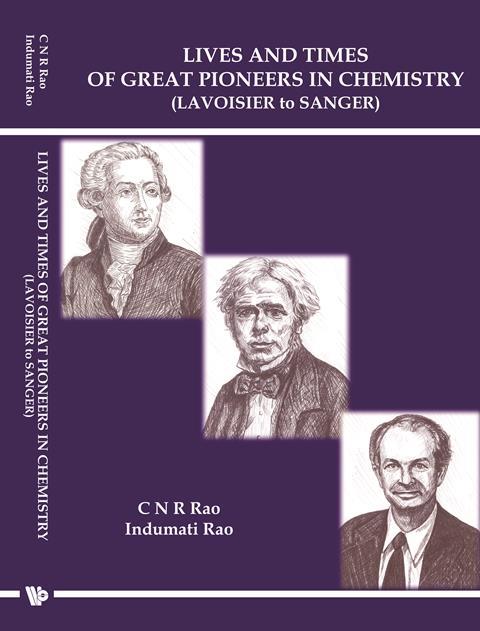 There was a time when professional historians of chemistry used to be a bit sniffy about the biographical approach to our subject. But thankfully there’s been a change of heart and books such as Lives and times of great pioneers in chemistry are now widely accepted as providing an introduction to the history of chemistry and a good read for the chemist, or aspirant chemist alike.

Indeed, I remember as a 15 year old being captivated by a second-hand copy of William Tilden’s Famous chemists: the men and their work. This 1921 compendium and the Raos’ book have several similarities. Each is made up of the potted histories of 21 chemists. Neither includes a woman chemist – not even Marie Curie, for whom I thought a good case might be made out.

Whereas Tilden’s book stops at the beginning of the 20th century, the Raos’ book takes us right into the 21st century with Fred Sanger, who died in 2013. Several entries feature chemists whose major discoveries were made in the last 100 years: Gilbert Lewis, Robert Robinson, Christopher Ingold, Henry Eyring, Linus Pauling, Robert Woodward and Sanger himself.

My review copy is a pre-production proof and I’ll assume a few points of concern will be spotted before the book is finally published. There are a handful of dot matrix structural formulae throughout the text. All are perfectly readable, but they give a couple of the pages a dated appearance. And we have some curious chemistry now and then. Under Richard Willstätter’s entry, a connection is made between cocoa and cocaine and in the next sentence we are told that codeine is a derivative of the same alkaloid.

Each entry is made up of background detail that is usually supplemented by short quotations from various sources, all of which are referenced. Together, the Raos give well-rounded accounts of their chemical heroes. As for further reading, they provide readers with a selection of references for each chemist. Some of these, like the Nobel prize citations, are easily accessible online. My first choice, though, would be to go to the relevant Wikipedia article, read the entry and explore from there.

The authors write that this book is a labour of love and they dedicate it to ‘all who appreciate, admire and enjoy chemistry’. At only £19 it will make an attractive gift. But I will go further: I hope copies will appear in school and college libraries, and that today’s students, on taking it out for a good browse, will be as enthused as I was 55 years ago by Tilden’s work.