Nothing dull about science 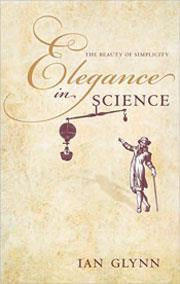 Some people consider science to be dull, but Glynn, a physiologist and writer, claims that many scientific theories and experiments are elegant, by which he means that they are imaginative, economical, creative and simple once explained.

In a series of well-written chapters, Glynn illustrates his idea with examples across a broad range of scientific disciplines. Each example is made more understandable to a general readership by placing it in its historical context.

Glynn starts with the theories linking terrestrial and celestial movements proposed by Newton, Kepler and Galileo. He then moves on to elegance in the areas of heat, electricity and light, exploring, for example, Thomas Young’s work on explaining Newton’s rings and the effects of interference between two beams of light.

The book then moves into the area of biology, with mechanisms of nerve conduction which culminated in a Nobel prize for Hodgkin and Huxley in 1963, and information handling in the brain.

The last chapter deals with what is probably the best known case of an elegant theory - the proposal of the double helical structure of DNA by Watson and Crick.

This example was not so much a single elegant insight, but what Glynn describes as a ’play in four acts’, extending over a century. The four acts were: the work of Darwin and Mendel on the transfer of information from generation to generation; the discovery of the role of chromosomes by Thomas Hunt Morgan; the role of DNA in heredity by Oswald Avery; and finally the elucidation of the structure of DNA. The last act, though forever associated with Watson and Crick, involved the insights of many other people - Edwin Chargaff, Rosalind Franklin and Maurice Wilkins to name a few. The Watson-Crick model, which gave a convincing account not only of the structure of DNA, but also of the way that it does its job, is what Glynn describes as the ultimate example of ’buy one, get one free’.

As a caveat, the book ends with an epilogue which shows that just because a theory is elegant doesn’t mean it is necessarily true. The hypothesis of the comma-less DNA code leading to the synthesis of the 20 natural amino acids proposed by Crick, Griffith and Orgel in 1957 seemed elegant at the time, but has subsequently been shown to be entirely wrong.

In summary, this book is a joy to read for anyone interested in how elegant experiment and theories have led to the development of much of the complex science of today.