Science in the real world

The secret anarchy of science 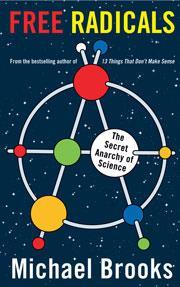 The premise of Free radicals is to dispel the perception that scientists are boring, method-bound and inhuman - unaffected by the randomness of life; that scientific discoveries are always born from rigorous, formalised and methodical work, under a strict set of rules known as the ’scientific method’; and that scientists are above all somehow ’different’ to normal people.

Real-world science, argues Brooks, is a rough and tumble affair, where erudite individuals buck the system and break the rules. There are power struggles, ethical dilemmas, substance abuse, corruption and sabotage - in short, whatever it takes to come up with the next big thing. He cites examples from across the gamut of sciences, from theoretical physics - Albert Einstein using dodgy assumptions and force of will to persuade the world of the accuracy of his famous equation E = mc2 - to the possibly deadly rivalry between chemists Gilbert Lewis and Irving Langmuir that ended in Langmuir’s death from cyanide poisoning. Suicide or murder? Perhaps we’ll never know.

The book is fun and easy to read, with a good balance of straightforward language and scientific content to keep a general audience happy without skimping on detail. There is also a useful reference section for those wishing to dig deeper. But although Brooks’s frequent repetition of his central tenet that scientists are secretly anarchists occasionally becomes a little tiresome, it does serve as a reminder that the excitement of science comes from breaking new ground. And if you’re doing that properly you should expect a bumpy ride.