Soonish: Emerging technologies that will improve and/or ruin everything 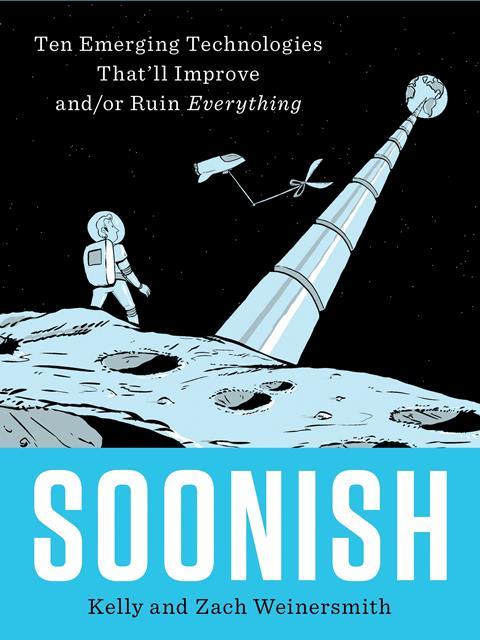 What will the future look like? Can we print new body parts? Will we have robot construction workers? Can we blast ourselves out of giant cannons to launch ourselves into space? These questions and more are tackled in Soonish, by husband-and-wife team Kelly, a bioscientist, and Zach, a self-described ‘someone who draws things’. This is not science fiction but a look at where science is moving to and what could happen in the near-ish future. If we’re lucky.

The book is split into three sections: ‘the universe’, ‘stuff’, and ‘you’. These sections contain a wide range of topics such as asteroid mining, augmented reality, brain-computer interfaces and my particular favourite, space elevators. It’s really impressive the way that this book can explain such complicated and varied topics in a way that is interesting and exciting while still being accurate.

As well as diving into the science, Soonish explores the economic and ethical implications of each technology, setting them into the wider landscape of our possible future. Zach is a well-known sceptic (as shown in his web comic Saturday morning breakfast cereal) and this book applies some critical thinking to temper the enthusiasm for shiny new technologies and madcap plans.

To really get to grips with the topics the authors have spoken to many of scientists behind the research, who are presented as the pioneers of new technology, visionary and passionate about their ideas.

Maybe it’s the strength of combining the skills of a scientist with those of a self-proclaimed nerdy cartoonist that means this book doesn’t take itself too seriously. Often science books can become dry and stuffy. The footnotes are sarcastic and irreverent, and nicely offset the reasonably technical content of the main text, and the comic strips break things up when it starts to get too serious.

I’d really recommend Soonish. It’s easy to read, just the right amount of geeky, and will probably make you snort a small amount of air out of your nose in amusement.