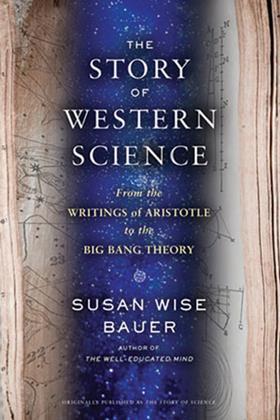 It’s often easy to read a textbook and grasp a concept such as gravity, atomic theory or chemical bonding, but it’s not often you read about it through the eyes of the discoverer. Susan Bauer delves into the history of science starting with (as the cover suggests) Aristotelian physics and continuing onto more modern concepts such as the theory of relativity and the big bang, looking at how scientists first developed their ideas and theories.

I found the introduction incredibly useful as she successfully details what the aim of book is and how she’s gone about doing it. For example, the chapters are separated by concepts and Bauer takes the time explain her reasoning for this. She also details how she has set the book out, intentionally writing it so that each chapter can be read separately, as well as in conjunction with the rest of the text. There are also further reading recommendations for each chapter that relate to each concept with a useful description to accompany it.

It’s fascinating to read about scientists’ discoveries building upon those beforehand and leading to the theories we know today. Part one covers the origins of science, discussing the works of Aristotle, Plato, Hippocrates among others. While part two explains ‘how and why the scientific method that we now take for granted arose’, and how the works of those such as Boyle, Hooke and Newton were founded on the knowledge of their forefathers in part one. The rest of the book covers the science of the earth, life and cosmos with the order being a deliberate choice to tell the stories based on previous discoveries. While, as mentioned before, the chapters can be read individually, Bauer successfully joins them up to create The story of western science.

The book paints a picture of how and when science happened, making for an interesting read – especially for those interested in learning about science through the eyes of the scientists.