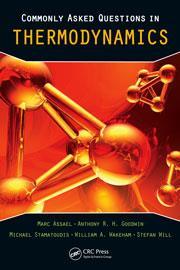 I did not count them, but there seem to be about 180 questions, ranging from the practical (’What is the best mode of operation for a gas compressor?’) to the philosophical (’What is energy good for?’). There are many questions that only an expert might think of asking (’How do I calculate the VLE of a polar mixture?’), and some that one hopes an undergraduate will ask (’How is heat capacity measured?’).

The level of the book is variable, but it is directed principally at erudite undergraduates, or at least their instructors, and graduate students. The courses in mind are mainstream chemistry and chemical engineering: the focus on the latter is just a little alarming for a straight chemist, but interesting. It is cleanly and attractively produced.

There are signs that it has been written by several minds, for some questions deal with ideal gases and others with perfect gases: you need to use the index entries for both. It is happily and largely reliably cognisant of Iupac notation and symbolism. Just occasionally it wanders, in my opinion, off the straight and narrow (’What is Law 2a?’, followed by ’What is Law 2b?’, terms that I had never encountered and never missed), and oscillates between crisp answers and lengthy, perhaps scaringly notationally elaborate, textbook style derivations that would strike fear into any student unless pre-digested by a sympathetic writer or lecturer.

Overall, it is a helpful book for an instructor’s shelf, needing distillation to turn it into a lecture, but unlikely to be found in a student’s backpack.