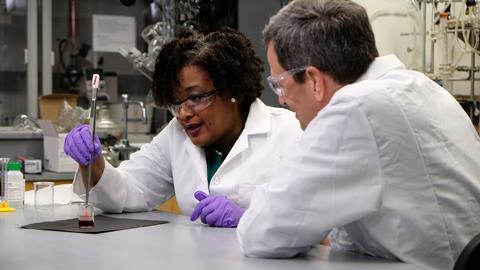 TV series: Beyond the Elements

Streaming free on PBS (US only)

The three-part docuseries Beyond the Elements, hosted by Emmy award-winning science and technology writer David Pogue, examines the surprising ways that elements combine together to cause chemical reactions, and how humans have enriched our world by learning to harness such processes.

Chemistry newbies will find the series informative and interesting, but even for seasoned chemists it will be fun and thought-provoking. Pogue has the enthusiasm and adventurous spirit of a kid in a candy shop, but a veteran journalist’s ability to extract important information from experts. If you’re alive, this series will likely hold your attention.

The first episode focuses on reactions, the second explores practicably indestructible materials and the third examines the molecules that make up life. The series features multiple massive explosions to convey the intimate relationship between fertilisers and explosives, a terrifying chili eating contest that reveals capsaicin’s potency, killer cone snails demonstrating their powerful venom, and a hair-raising speedway ride with legendary racing champion Mario Andretti to show how and why chemists help engineer the rubber in racing tires.

The documentary also includes dozens of super cool demonstrations that illustrate key concepts in chemistry. There are also numerous interviews with preeminent scientists in their fields, such as organic electronics researcher Malika Jeffries-EL (who is showing Pogue how to make nylon), and Frances Arnold, winner of the 2018 chemistry Nobel prize for her work on directed enzyme evolution. Plus, the audience gets to tag along on remarkable field trips to places as diverse as the LafargeHolcim cement plant in Missouri, the Corning Museum of Glass in New York, the Firestone Tire and Rubber company in Ohio, and a bustling grocery store (to learn about the four macromolecules that make up the human body).

Pogue presents a well-balanced story in Beyond the Elements – not only of the amazing scientific developments that improve our planet and the people responsible for them, but also of their potential pitfalls and ethical concerns. He delves, for example, into the controversies behind genetic engineering, plastic waste and fertilisers. ‘Just as a molecule can act as both a venom and a medicine, or one reaction can both help feed the world and blow it to bits, our scientific knowledge is a powerful tool, but it is up to us to learn how to use it well,’ says Arnold near the end of the final episode.

Beyond the Elements is for anyone who loves chemistry and is curious about the world around them. The series notes that one of the great and persistent unsolved mysteries is the origin of life, and another is whether we are alone in the universe or just a local branch of cosmic biochem. What it makes clear is that science is the only way to answer such questions.