Seeing further: the story of science and the Royal Society

Seeing further: the story of science and the Royal Society 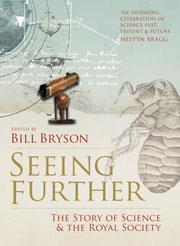 The Royal Society is the oldest and most celebrated institution of its type in the world, and this year celebrates its 350th anniversary. From 1645 a small group of kindred souls started to meet informally for philosophical and scientific discussions. On 28 November 1660 twelve of them, including Robert Boyle and Robert Hooke, attended a lecture by Christopher Wren, professor of astronomy at Gresham College, in London. They decided, with Wren, to meet weekly, as a Society for the Promotion of Experimental Philosophy for discussions and the conduct of experiments. They received a royal charter in July 1662, becoming the Royal Society of London; Newton joined in 1672. In 1685 it produced the first issue of the world’s earliest surviving scientific periodical, Philosophical Transactions . This, and most of the Society’s publications were in English rather than the Latin often used in those days. Contributions from that first issue give some idea of the coverage: they include An Accompt of the Improvement of Optick Glasses; An Account of a Very Odd Monstrous Calf (by Boyle) and Of a Peculiar Lead-Ore of Germany, and the Use Thereof.

An engaging introduction by Bill Bryson highlights some of the early achievements of the society (he notes that it had a foreign secretary a hundred years before the British government had one). Twenty-one essays follow on aspects of the society by an eclectic mix of scientists, science writers, historians and novelists. Inevitably some contributions are more interesting than others, but almost all are stimulating. Newton, Darwin and Boyle are the names most often mentioned, and cosmology, mathematics and evolution feature in the majority of the essays. There is much to interest the chemist, eg Philip Ball in a typically perceptive piece  Making stuff: from Bacon to Bakelite  and Georgina Ferry writes on x-ray crystallography, reminding us that Kathleen Lonsdale was one of the first two women to become fellows, in 1945.

This is a handsomely produced and superbly illustrated book, one to dip into rather than to read at a stretch: why does it have no index? It provides an enjoyable and informative account of many aspects of this unique institution, and at ?25 is an absolute bargain.