How to make a tornado: the strange and wonderful things that happen when scientists break free

How to make a tornado: the strange and wonderful things that happen when scientists break free

The stereotypical image of a scientist is too often that of a serious-faced white-coated individual, who spends their career in the lab methodically pushing back the boundaries of science. 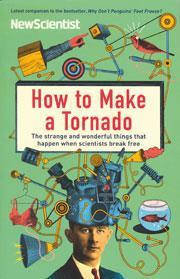 While the Darwins, Newtons and Einsteins of the world have transformed our understanding of it immeasurably, the vast majority of their more modern day peers remain sadly anonymous to the public eye.

The New Scientist  ’s latest coffee table-style book tries to blow away the myths and unfair stereotypes by presenting a selection of more unorthodox research that has been reported within its pages over 53 years. To the book’s editor, these are science’s unsung heroes whose principles are as true as Darwin’s but whose methods of investigation also manage to raise a smile.

Within the book there are unlikely reports of a coal-fired TV, research blunders, soul weighing, self-inflicted suffering in the name of science and a random poetry generator, among many other well presented, entertaining and hard to believe tales.

As its editor admits, the state-of-the-art in research can quickly move on, which can make the historical work documented in this book seem obscure or trivial when presented out of its original context.

Though the book is clearly intended to be a light hearted and well meaning celebration of the creativity and ingenuity of researchers in action, I’m concerned that, as presented, they will be inadvertently and unconstructively tarred with the ’mad scientist’ brush by the more impressionable reader.

Science is a creative, stimulating and challenging discipline, where thinking outside the box is sometimes the way big leaps forward are made. Let’s make sure that we get our PR right so that the next generation Newton is inspired to think big.