What Stars are Made of: The Life of Cecilia Payne-Gaposchkin 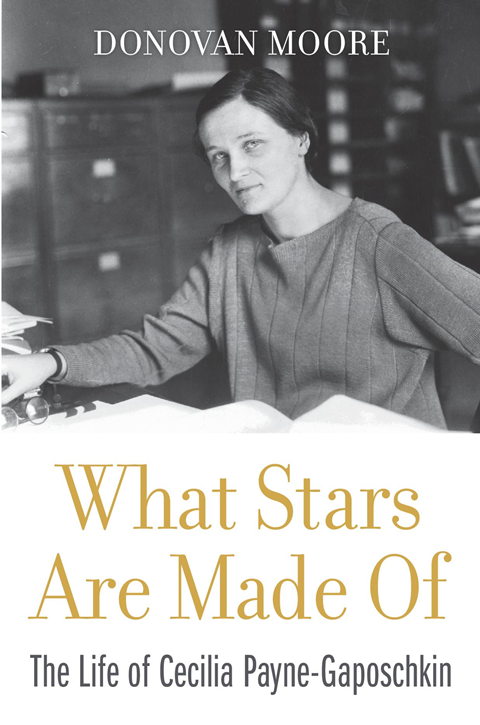 Cecilia Payne-Gaposchkin was one of the world’s first astrochemists. This book tells of her striking scientific insights, her frustrations as a female scientist and how she rose to become the first female professor at Harvard University.

Born in Wendover, UK, in 1900, she won a scholarship nineteen years later to Newnham College, Cambridge, to study chemistry, physics and botany, attending lectures by J J Thomson, Rutherford and Bohr. Her epiphany came with Arthur Eddington’s lecture on his observation of the bending of starlight by the sun’s gravitation, thereby proving a central tenet of Einstein’s general theory of relativity. Payne was bowled over, writing: ‘For three nights I did not sleep; my world had been so shaken that I experienced something like a nervous breakdown’.

She became desperate to do scientific research, but knew that there was little prospect of doing this in Britain since women could not get degrees from the University of Cambridge until 1948. She persuaded the director of the Harvard Observatory for a fellowship to analyse the Observatory’s one million stellar spectra, and applied to this problem her profound knowledge of quantum mechanics acquired in Cambridge. In 1925, her PhD thesis Stellar Atmospheres was published, later to be called ‘the most brilliant thesis ever written in astronomy’. Its main conclusions were, for that time, startling: that these atmospheres consist predominantly of hydrogen (particularly H+) and helium in much greater concentrations than was hitherto believed. Initial opposition to her ideas on the primacy of hydrogen and helium in stellar atmospheres weakened, and final acceptance came from Henry Russell of Princeton Observatory in 1929.

In 1931, Payne took American citizenship and married the astronomer Sergei Gaposchkin. In 1956, she became Harvard’s first female professor, taking the chair of astronomy. In 1979, Payne-Gaposchkin was diagnosed with advanced lung cancer – for 50 years she had been a chain-smoker – and died that year.

The book is very readable and well organised, giving remarkable insights into its paradoxical subject who was both shy but determined. The approach is chronological, with a light and easy style combining archival and anecdotal material, information from Payne-Gaposchkin’s autobiography, The Dyer’s Hand and from her daughter Katherine. The levels of chemistry and astronomy in the book would not cause difficulty to the general reader. The book is extensively referenced throughout, but I would have liked more direct citations of her work (of her 248 papers only four are listed). The index is excellent and there are good monochrome photographs.

One learns rather more about the dreadful difficulties faced by women in science in the early twentieth century than about Payne-Gaposchkin’s profound scientific achievements, but nevertheless this is a worthy tribute to a truly remarkable woman.

Correction: The original review stated that women could not get degrees from the University of Cambridge until 1925. In fact, it wasn’t until 1948 when women were first awarded degrees at the university. Thank you to HJ Godwin for bringing this to our attention.