You don’t get me, I’m part of the union

Graduate student unions have power for now, but it may not last

How do you tell the difference between a chemist and a factory worker? Ask them to pronounce ‘unionised’. It’s a weak joke (blame our business editor) – and also one that doesn’t work anymore, thanks to a ruling in August by the US National Labor Relations Board. 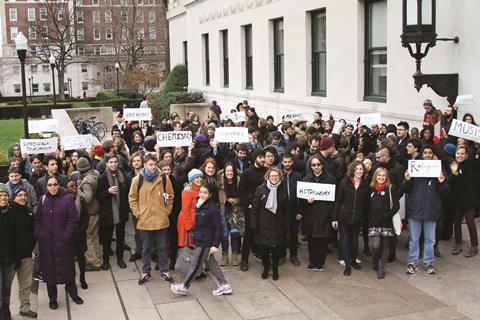 The 3–1 decision, in favour of teaching and research assistants at Columbia University, means that graduate student unions at private universities in the US have the right to collective bargaining (public universities aren’t covered – that’s a state issue). This reverses a previous decision in 2004 at Brown University that grads couldn’t form a union – which in turn reversed a decision in 2000 that they could.

The kernel of the problem is the strange dual identity grad students possess: they are both student and employee. As employees, they argue, they should be able to collectively bargain for better pay, benefits and working conditions. Not so, push back institutions (the entire Ivy League among them) – you are students, and collective bargaining threatens to stamp over academic freedom and student–mentor relationships. It’s a weird knot that isn’t immediately easy to solve, only compounded by the partisan politics at play in the US: the Democrats are pro unions, the Republicans are not.

For now, though, the grad students have won. Representatives are already chomping at the bit to start negotiations. Plans are already being drawn up to discuss a host of issues, with Duke grads listing dental plans, transparency and formal contracts of role responsibilities at the top of the agenda. These are all worthy aims that unionisation can achieve.

Yet before we start singing the Internationale, a little perspective is necessary. In a piece for the Huffington Post, Joseph Mastrosimone, associate professor of law at Washburn University, has warned the move will damage honour codes and safe space initiatives because of the protections now afforded under the National Labor Relations Act; put student councils in opposition to the act; and create tricky situations if a union representative receives a bad grade – when grading is subjective, how do you prove it is not related to their union activity?

These are valid points, which demonstrate how the blunt instrument of union law doesn’t marry neatly with academia. Yet Mastrosimone’s concerns are largely theoretical, and easy enough to resolve with a hefty dose of common sense. The real problem is whether this is the final chapter in the union saga; if the Republicans return to power, we could just as easily see the ruling flip again in a few years.

Until then, it’ll be interesting to see if an even stronger work environment will emerge in US academia; as any chemist will tell you, unionised groups don’t easily dissociate.