Just because you can’t run 100m in 9.58s doesn’t mean you can’t have a career in sport. A number of chemists are using their skills to improve sporting prowess – and all without breaking a sweat.

With a client list that includes premiership football and rugby clubs, as well as individual sportspeople such as boxers, IPRO Interactive aims to give athletes the right information to optimise training and improve performance. A small but growing business based in Oxfordshire, UK, IPRO’s tool of choice is the saliva test. 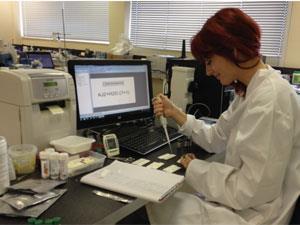 ‘Most people in sport want to train harder than is actually beneficial,’ says Joe Dunbar, IPRO Interactive’s managing director. ‘So you need indications as to whether you’re doing too much or too little.’ IPRO Interactive’s tests measure the levels of key hormones and antibodies in saliva, to determine the fitness level of an athlete at various stages of training. For example, secretory immunoglobulin A (sIgA) is an antibody found in saliva as well as the eye and gut. Referred to as the first line of defence, low levels of sIgA can be used to predict illness. However, for athletes, low levels of sIgA could mean it’s time to rest. ‘When the immune system is suppressed, then the general performance isn’t so good and you have a higher risk of getting ill or injured,’ says Dunbar.

IPRO’s tests are quick, non-invasive, and provide results for athletes and trainers in a matter of minutes. ‘Our tests all rely on the technique called lateral flow diagnostics, which is similar to a pregnancy test,’ says Ahmed Jehanli, director of research and development. However, unlike a pregnancy test, which gives a yes or no answer, these tests give a quantitative readout for a number of analytes in a sample.

But creating quantitative tests that take only 15 minutes to run is a big challenge. Not only did the company have to develop sensors that could produce reliable quantitative data, it also had to formulate a buffer that would stabilise the saliva sample. ‘There’s a huge amount of chemistry involved in what we do,’ says Jehanli. In order to develop sensors, for example, the team often has to chemically modify analytes to produce corresponding antibodies. So a strong chemistry background is a must for anyone joining the team. 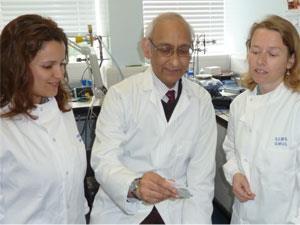 The work on biosensors is not just taking place in industry. Pankaj Vadgama, professor of clinical biochemistry at Queen Mary, University of London, UK, is also helping to improvesporting performance, as part of the Esprit project (elite sport performance research in training). However, in contrast to IPRO Interactive, Vadgama has chosen to focus on tissue rather than saliva.

‘The exciting thing with tissue is that it’s a new frontier in a way,’ says Vadgama. ‘In tissue, it’s similar but not identical to what’s going on inside blood, which means you get different kinds of biological information.’

Vadgama’s team is developing needle electrodes, which sit just under the skin, in an effort to analyse the levels of glucose, oxygen and lactic acid present. ‘We’re focused on very simple targets which are extraordinarily important,’ he says. ‘If you know what’s going on with those, you know a great deal about the rest of the human, whether they are an athlete or not.’

Given its invasive nature, the main challenge for Vadgama’s team is not how to measure the analytes but to ensure that the device is safe to use. ‘In many ways, what we’re doing has more to do with materials chemistry in the sense that we’re obsessed with safety and biocompatibility and for that you must get the interface between the device and the human right,’ he says. As a result, Vadgama suggests that chemists with a good understanding of interfaces could have a lot to offer. And a background in analytical chemistry would be a definite plus.

For any biosensor to be used in the real world, getting the chemistry right is one aspect of a much wider picture. ‘Biosensors can’t be purely chemistry, they have to be partly engineering, materials science, design formation,’ says Vadgama. However, he sees this as positive. ‘Get in there because you discover that you’re working with engineers, biological scientists, medics, sports scientists and you’re designing a powerful system,’ he says. ‘Even though some of the chemistries are simple, the way they give you information about biology is wholly innovative so there are great new discoveries to be made.’