Advice for scientists who feel like they don’t belong 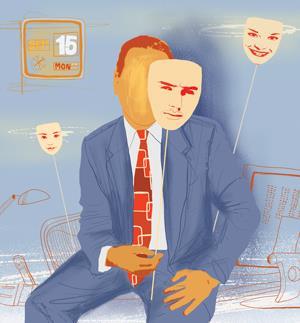 Many of us will have experienced the feeling that we don’t really know what we are doing, and at any minute our bosses and colleagues are going to work that out. A US study in 1984 suggested that 69% of people have suffered from this phenomenon, which has become known as imposter syndrome. For most of us, it’s something we can shake off. But in today’s hyper-competitive academic world, where publish-or-perish dynamics create a tough environment in which to thrive, these feelings could have serious career repercussions.

Samantha Sutton, a career coach based in New York, US, has spent the past eight years working with researchers, giving them career guidance and helping them work out their strengths. ‘What’s funny is that a lot of the postdocs I work with are scientists, and yet they are very unscientific about themselves,’ says Sutton. ‘When someone has the imposter syndrome, they can make career decisions that are not based on their actual skills or talents.’

Coined by clinical psychologists Pauline Clance and Suzanne Imes in 1978, imposter syndrome was first observed in interviews with 150 successful women, who despite their success, reported they did not feel successful internally; they were convinced they did not deserve their success, and it was down to luck rather than their own abilities. The syndrome strikes high achievers and although some studies have indicated its effects can be more pronounced in women, it is seen in both genders. Elizabeth Harrin, author of Overcoming imposter syndrome, concurs. ‘If I am looking at the sales information from my book, it’s been bought by as many men as women.’

The additional effects of ‘imposterism’, Harrin says, are ‘feeling that everything you turn in has to be perfect, being the kind of person who never accepts praise’ and ‘on a more day-to-day basis, just having a lot of stress in the workplace’. It often manifests itself in sufferers feeling they are putting in more hours but effectively getting the same outcomes as others. In the long term, the syndrome means sufferers tend to hold back and miss opportunities because they don’t think they are good enough or have little confidence, she says. ‘They turn down a research project or something exciting that could have given them better career prospects.’

The significant role imposter syndrome plays in career decisions was also highlighted in a 2013 study,1 which linked the syndrome to career ‘downshifting’. Sociologists Jessica Collett and Jade Avelis, from the University of Notre Dame, US, surveyed 461 PhD students and characterised a group who had shifted their ambitions from aspiring to tenure-track academic positions to jobs outside academia, such as policy work and teaching. They found 11% of women and 6% of men interviewed had ‘downshifted’ ambitions – and that there was a relationship between this group and those suffering from imposter syndrome.

Sutton agrees with the findings: ‘If you have imposter syndrome or a lack of belief in yourself, the odds are slim that you will think you can get that academic job, and so you might not even apply.’ The syndrome can also affect postdocs looking to move into other areas, she adds. ‘They undervalue all the years of research they have done, so even in job markets where there are lots of jobs, they will still believe that they are not qualified.’

But the job market in academia is tougher than ever before, and with many more postdocs than permanent posts, there is the fear of being stuck in a cycle of constant temporary contracts without career progression. So when do you know that it’s time to start thinking about alternative careers? How can you be sure it isn’t imposter syndrome talking?

[[The voice in your head is not the voice of truth … you don’t need to believe it]] ‘In terms of whether or not you should make a career out of academia or not, knowing how competitive it is, that’s a really hard call, you can be really good and still not make it,’ says Harrin. Sutton agrees, remarking that it’s worth remembering that succeeding isn’t necessarily about being the best anyway, but often it’s about having the right strategy in place. ‘It’s a fundamentally different question than “am I worthy” or “am I good enough” – it’s switching the question from “am I good enough” to “am I willing to do what it takes?”’

Helen Willcock, now lecturer in polymer science at Loughborough University, UK, was a postdoc at the University of Warwick, UK, for six years. She says it’s not always so easy to know if you have what it takes to secure an academic position. ‘In some ways, if I had looked at myself like that, I would have never applied for this job because compared to some other people I didn’t have the same number of publications and I didn’t have funding that’s been brought in from the research councils. So in some ways I was a poor candidate, but in another way I was a strong candidate.’

Willcock admits she had waves of feeling less confident; and in her new job, she still experiences such feelings from time to time. ‘When I started lecturing, which has only been this year, I had a massive thought of “what am I doing, can I do this?”’ Fortunately, she says, she has the ability not to dwell on these types of thoughts, which can hold others back.

Emily Parker also went through uncertainty about her future. In 2015 she left her three-year postdoc in surface modification of materials at the University of Oxford, UK, for a research role with De La Rue, the world’s largest commercial banknote printer. She feels this was the right decision and one she hasn’t regretted.

Parker doesn’t think she suffered from imposter syndrome in the sense that she felt she would be exposed as a fraud, but she does recognise some of its other aspects: ‘I think I was and still am quite hard on myself, I never quite thought I was good enough.’ At one point during her postdoc she did think about staying on in academia, but felt she lacked the necessary commitment – a common sentiment in those with the condition. ‘I felt like I would need to give up a lot of my life to do this,’ Parker explains. ‘Do I really love it enough to give up a lot of my personal life, to invest what I perceived to be necessary to be successful?’

Fortunately, there are techniques you can use to overcome the condition. Sutton suggests the best way to get a more realistic picture of your own abilities is to collect data from other people. She advises clients to interview their friends, colleagues, family and ask them about their strengths – something that many people rarely ask others objectively. The positive views of others ‘can create space in your mind for a different belief about yourself,’ says Sutton. ‘And with proper guidance, you can chose to shift that self-perception.’

Working in an environment where these kinds of issues are discussed is also important. Parker was involved with the University of Oxford chemistry department’s Athena Swan Charter application, which benchmarks good employment practice to promote gender equality. ‘These sorts of things [such as Imposter syndrome] were raised a lot, and so at an early point in my postdoc I was aware of this and was quite proactive in pushing myself and not taking a step back.’

Willcock agrees that her success has also been helped by her ability to ‘lean in’ and take opportunities offered. ‘I think I was pretty good at that – chasing down little pots of money or going to conferences or talking to people and asking their advice.’

Another trick Sutton suggests is naming the voice in your head that says you are a fraud. ‘The key is to realise that the voice is not the voice of truth. It’s not a divinely inspired, all-knowing voice.’ Sutton adds. ‘This means that you don’t need to believe what she says; you can just see her as one of the many voices in your mind.’