It took some time, and a lot of jobs, but Matt Carnie eventually found a role he loves in materials research. Manisha Lalloo asks for his career analysis

When Matt Carnie graduated from Swansea University with a degree in chemistry, he didn’t have a clear idea of what he wanted to do. He would eventually decide to pursue a career in research, but that decision took many years and a trip around the world – a journey that began by stepping into a local recruitment agency and landing a job as a quality control chemist on the tiny island of Guernsey. 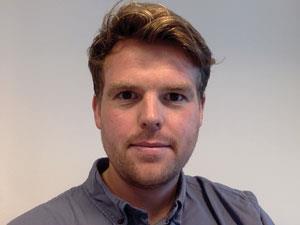 Carnie tested raw materials and finished products at a pharmaceutical and cosmetics manufacturing plant. ‘I really enjoyed it,’ he says. ‘I learnt loads of analytical techniques and good laboratory practices, but after 12 months I wanted to move on.’ Keen to see the world, Carnie used his savings from the year to buy a ticket to a larger island: Australia.

Carnie’s working holiday visa permitted short stints of employment. He signed up for agency work and found that the temporary contracts offered by manufacturing labs were a perfect fit. ‘There were other backpackers in all the labs I worked in because our visas only allowed us to work three months at a time,’ he says. Working in a lab was also more lucrative than his friends’ jobs picking fruit.

Carnie worked on medical devices for asthma at Pharmaxis, spent a day at Coca Cola in Sydney and took shifts at Roche testing batches of Berocca, all the while travelling around Australia, New Zealand and Bali. ‘I can’t say I was genuinely interested in quality control or analytical chemistry, but my qualifications fit and I had the experience. I enjoyed a lot of the work but I don’t think it was something I wanted to do forever,’ he says.

Visa expired, Carnie returned to Wales to consider his next move. With the chemistry department at Swansea University now closed, a careers advisor told Carnie about a research masters in recycling technologies, for which Carnie could receive a grant to pay for his studies.

‘I loved it,’ says Carnie. ‘I was looking at the properties of recycled plastics. That was pretty much when I decided I wanted a career in research and I wanted to do a PhD.’ 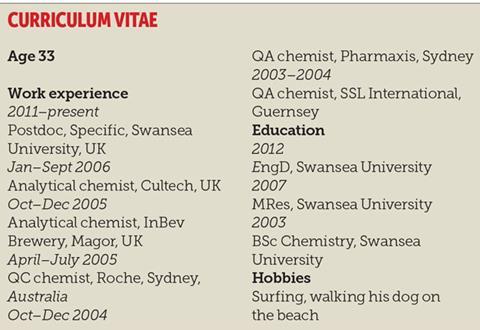 Carnie’s PhD was an engineering doctorate, which he spent working on photovoltaics. As luck would have it, towards the end of his PhD Carnie’s supervisor was awarded a £20 million grant for a new project called Specific (the Sustainable Product Engineering Centre for Innovative Functional Industrial Coatings). ‘It’s a bit of a mouthful, but basically it’s all about energy technology and generating, storing and releasing energy in order to make buildings into power stations.’ Today, Carnie works as a post-doctoral researcher on the project, making and characterising solar cells. ‘At the moment my research is concerned with lead halide perovskite solar cells. They are very new solar cell technology, with very high efficiency. It’s a very exciting field.’

Carnie is based in the materials engineering department of Swansea University but finds himself working alongside a large number of chemists as well as materials scientists. A lot of the research is materials science, but he notes it is really applied chemistry.

Although a career in analytical chemistry was not for him Carnie treasures his time as a quality control chemist, which provided him with the chance to travel and gave him the grounding for a life in research. ‘A lot of the work I did was in pharmaceutical laboratories so everything has to be done properly and transparently and records have to be kept meticulously. That really instilled in me a way of working in laboratories properly.’

And he couldn’t be happier with his move back into research. ‘I never get up in the morning and dread coming into work. My research is pretty cool – I consider myself very fortunate.’