The Commonwealth Scientific and Industrial Research Organisation (CSIRO) is Australia’s national science agency and one of the largest and most diverse research agencies in the world.

’We aim to become one of the most respected research and development organisations in the world,’ says chief executive Megan Clark. ’CSIRO’s strategy is to bring together the very best scientists to undertake new discovery, as well as apply all our skills to help our industry partners compete,’ she says. 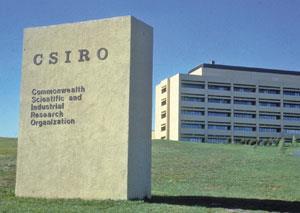 CSIRO’s scientists have made many notable breakthroughs and inventions, such as developing polymer banknotes, inventing the insect repellent Aerogard, and creating a technology that made the wireless LAN fast and robust.

It has more than 6500 staff worldwide, of which approximately two thirds are scientists. It operates three national research facilities - the Australian Animal Health Laboratory, Australia Telescope, and the oceanographic research vessel Southern Surveyor - as well as over 30 other research facilities. Outside Australia it has a laboratory in France and staff in Ireland, the Netherlands and the US.

CSIRO’s research work spans seven sectors - agribusiness; energy and transport; health; information, communication and services; manufacturing; mineral resources; and environment and natural resources. It is largely carried out by its 15 divisions - the organisation’s business units. There are also 10 National Research Flagships. The flagship programme, set up in 2003, aims to address national issues such as climate change, sustainable agriculture, and preventative health with long term goals set over 10 years. The programme is one of the largest scientific research endeavours ever undertaken in Australia, with the total investment up to 2010-11 expected to be close to Aus$1.5 billion (?1 billion).

Just over half of CSIRO’s Aus$1.3 billion revenue in 2008-09 came from government funding. The rest is largely made up from investment and consulting, royalties and intellectual property.

CSIRO employs around 700 chemists. Research scientists need to have a PhD or equivalent and proven research ability in their field.

Polymer scientist Gerry Wilson joined CSIRO in 1992 to develop security devices for bank notes. He was attracted by working on such a tangible and applied project. He remembers his first day. ’I’ll never forget driving to a meeting at the place where they print the currency with my boss. He was chatting about CSIRO. In that half hour journey I really did feel like I’d found a home,’ he says. 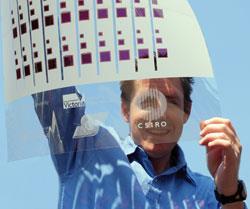 ’It is nice to know that some of your work has had an impact,’ he says. People have tried to lure him away with offers of more money but he has chosen to stay at CSIRO. It’s the people, the opportunities and the exciting stuff that is happening at the organisation that keep him there, he says. Although he also stresses that CSIRO does pay them well too.

Wilson now heads CSIRO’s research into flexible electronics, developing ultra low cost solar cells that can be printed on plastic, and flexible television screens. He hopes the work he is doing now will transform the industries of the future.

Chemist Ron Denning, a research group leader in fibre chemistry, also cites the applied nature of the work as a plus point. ’The most satisfying part of working at CSIRO is taking projects all the way through to completion and delivery to industry,’ he says. Denning works on improving the processing performance of wool, and the comfort and drying time of wool clothing. He has led a variety of projects since joining CSIRO in 1990, including investigating the benefits of applying nanoparticles to wool fibres; developing the next generation of stain resistant wool fabrics; and creating a 100 per cent natural fibre fabric that wicks moisture away from the skin.

There are also a number of opportunities for budding scientists. CSIRO runs work placements for secondary school students and industrial traineeships for undergraduates. In a scheme to help science graduates get jobs, those with little or no experience can work for 6-12 months as unpaid volunteers under the supervision of a research scientist.

Outside research, CSIRO also has an independent science and technology publishing arm that publishes over 30 journals as well as books, magazines and CD-ROMs, operates school programmes around Australia that include student workshops and research projects, and teacher resources.

Karen Harries-Rees is a freelance science writer based in Melbourne, Australia