As Nasa’s Curiosity rover roams the red planet, Nicola Davis talks to the scientists whose laboratory is a million miles away

In August 2012, the world held its breath during a nail-biting seven minutes as the Mars rover Curiosity touched down on the red planet. Its precious cargo, the Mars science laboratory (MSL), contains a host of gadgets to probe the geology of Mars and reveal whether the planet once possessed habitable environments. For the team behind the MSL’s CheMin instrument, the rover’s million-mile journey is the culmination of decades of work.

CheMin (a contraction of chemistry and mineralogy) is a portable powder x-ray diffraction and x-ray fluorescence instrument that can sample the rocks and soils of Mars to determine their mineral make-up. As well as revealing their chemical nature, CheMin also provides information about their structure, revealing how these minerals were formed and modified. For example, certain structures only form under conditions of high temperature and pressure, providing insights into the planet’s tempestuous history. What’s more, certain minerals thought to exist on the planet could contain water molecules in their structures; detecting these would provide evidence that water was once present on Mars. 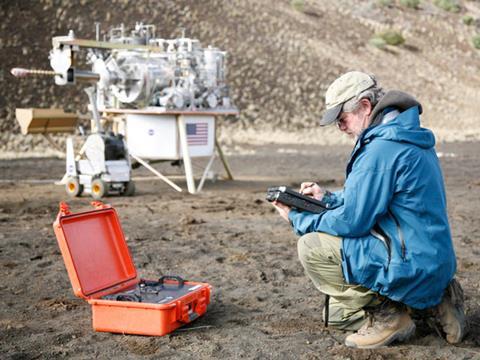 Terrestrial tests put CheMin through it paces in Death Valley, California, US

With x-ray diffraction at CheMin’s heart, a career in planetary science is a real possibility for those with training in engineering, chemistry or geology. While the CheMin team does not currently have any pure chemists on board, it’s an exciting field for chemists to enter, particular those with a background in solid state research. ‘Several of us have a lot of training in geochemistry and really a lot of what we do as geologists is chemistry,’ says David Bish, professor of geology at Indiana University, who joined the CheMin project in its early stages. ‘We spend a lot of time trying to understand the solid phases, the minerals that we find on Mars, we try to interpret processes from the past from the minerals, and that’s essentially chemistry with natural materials.’

The career paths of CheMin’s designers, much like the design of the instrument itself, are perhaps best described as unconventional. The project’s principle investigator, David Blake, has spent over 20 years taking the instrument from the idea in his head to its place on the spacecraft. ‘It may have the record for the longest gestation for an instrument,’ laughs Blake.

Blake’s path to Nasa was far from direct. Having studied aspects of geology during an undergraduate biology degree, he took the ‘entire core sequence of books for the geology programme’ off to sea with him during his military service in the US Navy. On returning to shore, Blake took undergraduate, master’s and PhD degrees in geology. But when difficulties arose in finding both Blake and his wife jobs in the same city, the couple moved to California where Blake took a job at a surface science company, working long hours with an electron microscope. It wasn’t his career of choice, but as Blake puts it, ‘there’s very little you do that you don’t learn from’.

Upon discovering that the Nasa Ames Research Laboratory in California was looking for geologists, Blake wrote a proposal and applied for a postdoc. At Ames he worked in several areas, including the study of interplanetary dust, before coming up with his idea for a compact, portable x-ray diffraction unit. 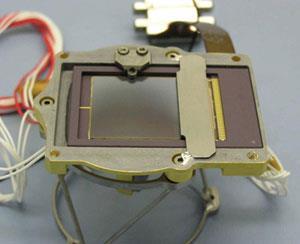 CheMinâ€™s detector is the size of a postage stamp

‘I’ve always had an interest in instruments and I’ve built a number of them either for the lab or for space and so I certainly like that,’ reflects Blake. ‘But I also really enjoy just discovering things.’ The two passions were well matched for creating the CheMin instrument, and as the early prototypes proved promising, the concept took off. But getting an idea from Earth into space is a bumpy ride – Blake submitted proposals for the instrument on the European Rosetta project and then the 1998 Mars lander before it finally won its place on board Curosity. ‘You just have to be completely stubborn and driven,’ says Blake. ‘You have to absolutely believe in your idea because no one else does when you start.’ His perseverance paid off – in 1999, the instrument even won an award from R&D Magazine declaring it one of the top 100 technological innovations of the year.

Phillipe Sarrazin became familiar with x-ray diffraction during a PhD in materials science,  spending hours fixing and adapting them for his experiments. His skills were recognised by Blake who recruited him to work on the CheMin project in 1995, although Sarrazin hadn’t planned on a career developing planetary instruments – ‘It was kind of an accident,’ he says. Sarrazin became involved in the design of CheMin as well as developing techniques and algorithms for processing the data it produced.

Sarrazin made a key contribution in equipping the instrument to use course grain powder. Usually, grain sizes of less than 10µm, similar to face powder, are required because ‘you need a very fine powder to get random orientations of the crystals’. But producing such a powder on Mars would be extremely difficult. Sarrazin realised that by vibrating the coarse powder, the necessary randomisation can be achieved, making it possible to use samples straight from Curiosity’s drill. The vibration system won the Nasa Commercial Invention of the Year Award in 2010.

One of the biggest challenges Sarrazin faced was also the smallest: miniaturisation. ‘Everything I used before developing CheMin was the weight of a car and the size of a big American fridge, so it was very far from any planetary mission potential,’ he explains. However, he realised the possible applications of compact x-ray diffraction instruments (the CheMin instrument is only around 30cm3), and started a company, inXitu, in 2004. The company, now part of Olympus, is Sarrazin’s primary focus, making CheMin’s lightweight, portable x-ray diffraction technology available to scientists on Earth. Applications include rapid analysis of rock and soil fragments in the field, as well as identifying counterfeit drugs. But Sarrazin continues to contribute to the CheMin project, particularly in data processing, and is also developing other planetary instruments at the Search for Extraterrestrial Intelligence Institute.

Bish has been involved in the CheMin project almost from the beginning – his background in x-ray diffraction and clay minerals made him a perfect fit for the team.

After an undergraduate degree in geology, Bish moved to Pennsylvania State University where he undertook his PhD under the supervision of the eminent scientist, George Brindley. A three year postdoc at Harvard followed, also working on x-ray diffraction, before Bish moved to Los Alamos National Laboratory, New Mexico, where he remained for 23 years. 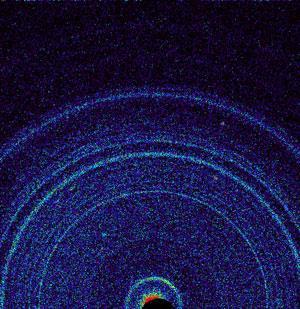 Bish’s interest in planetary science started at Los Alamos, thanks in part to the close proximity of a space science group. ‘We would get together and we would ask them questions about the moon or Mars, because they were sending probes there, and they would ask us questions about geology and rocks and minerals,’ recalls Bish. After beginning work on a miniaturised x-ray diffraction device, with space missions in mind, Bish and his team learned that Blake had a similar goal and the groups joined forces in 1992.

By the time the instrument was chosen for the Curiosity mission, the research group had expanded dramatically. Now the CheMin project involves scientists in more than 10 research bases including the Johnson Space Center and the University of Arizona, but having the team scattered across multiple sites hasn’t been a problem. ‘We have periodic team meetings,’ says Bish, ‘but primarily we just communicate by email.’ As the project grew, each scientist took on specific roles according to their skills and talents, but Bish puts the success of the project down to the broad scientific backgrounds of the team members. ‘They haven’t focused on just one little thing,’ says Bish. ‘We all know a fair amount about the different aspects, and it works.’

After all the hard work and long hours, the CheMin instrument is now an undisputed success – its first results, revealed in October 2012, showing certain Martian soil samples resemble volcanic glass found on Earth. ‘It was almost scary it worked so well,’ says Blake. And of all the memorable moments the CheMin project has provided, receiving those first data was perhaps the most memorable so far. ‘We opened up the data files and looked, and half the people in the room yelled “it worked!”’ smiles Bish. ‘That was one of the highlights of my career.’