‘I look out and I see misunderstanding of science. I see people pushing pseudoscience. I see things we know just aren’t true being represented as truth … I despair of that. I think a lot of scientists do. The way I deal with it is I am doing something about it.’ Nathan Allen is a research chemist at Angus Chemical in the US. In his free time he is also a moderator on Reddit, an online forum for discussing interesting news and views where the community acts as ultimate arbiter by voting to highlight the best content. Allen is one of 930 experts that help to curate the site’s science community, where users are free to share links to science stories or comment on a link someone else has submitted. 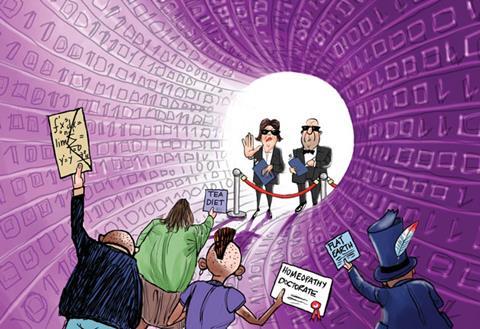 These moderators – scientists from across the globe – work around the clock to police 200,000 visitors every day. They are guardians of a new frontier in science communication. Part gatekeeper, part educator, each volunteer gives their time to ensure accurate, rigorous science is accessible to everyone.

The team encourages anyone visiting their community to share relevant scientific news, granting the general public a chance to understand and appreciate the latest developments. But any submission must also include a link to the primary research paper – ensuring experts can read the data and reach their own conclusions. ‘We need to bring in real, serious scientists to have meaningful discussions,’ Allen explains. ‘But also we need the general public to understand as well.’

This balance – public accessibility against academic detail – is a constant struggle faced by the scientists giving up their leisure time to curate the internet’s busiest websites. Yet it can be a worthwhile challenge for those willing to face it, says Wikipedia editor Andy Mabbett, who recently spent a year as the Royal Society of Chemistry’s Wikimedian in residence. ‘Ordinary people can do as much as they can, but it takes an expert to judge the importance and nuance,’ Mabbett explains. ‘You need people with the knowledge of what isn’t there, to fill in the gaps.’

These gaps are plentiful, despite Wikipedia’s staggering size and scale. Wikipedias exist in 290 different languages – the English language version has more than 5 million articles – as well as related sites dedicated to shared images, quotes and even data mining. All are free to access, and free for anyone to edit at any time.

Given this scope, it’s unsurprising that vandalism occurs almost every second. Mabbett describes Wikipedia as ‘the closest thing we have to working anarchy’, though insists the community is ‘largely self-correcting’. ‘People who take an interest in an article can watch list it, watch out for vandalism and undo it or revert it.’

While vandalism is easy to spot, there are greater dangers that require a more professional eye. Although the online world has brought a new dimension to genuine science communication and collaboration, it’s just as easy for bad science to be touted to an unsuspecting public.

‘There’s a lot of this,’ says Mitch Garcia, chemist, science writer and administrator of Chemical Forums, a message board primarily aimed at chemistry students. ‘People are adamant about their pet pseudoscience of choice.’

Chemical Forums developed in 2003 after Garcia, then a teaching assistant, became tired of repeatedly answering the same questions from students. Seizing the initiative, he created a forum where they could find the answer, and told them to post their questions there. More than a decade later, the result is a site dedicated to chemistry education with around 1 million page views a month. Garcia’s approach to tackling pseudoscience embodies the gatekeeper–educator philosophy. At first he will engage with these visitors, highlighting the flaws in their argument. If that does not work, he has a duty to protect his readers from unsound opinions. ‘Their arguments are usually refutable with back-of-the-envelope calculations … if they are becoming a distraction we then move them off the website.’

While this personal touch is achievable on smaller sites, an online behemoth such as Reddit requires a more regulated approach. ‘We needed an unbiased role,’ says Allen, explaining how they set their strict content rules. ‘What is science? An unambiguous rule is “is it in a [peer-reviewed] journal?”’

The Reddit science team rely on the peer review system to help screen posts, acknowledging it just isn’t possible for the team to read every paper thoroughly. ‘Is it perfect? No. Everyone knows peer review isn’t perfect. But it’s something, some sort of filter.’ The moderators also remove any posts counter to established scientific consensus (for example climate change denial). Yet even these hard and fast rules are not enough to fully manage the flood of daily content. ‘We were just discussing last night how to determine what a valid science journal is,’ Allen says, referencing the rise of predatory journals and the struggle to determine the validity of papers from low impact factor publications. New models of academic publishing have also brought new challenges. ‘Open access is still developing,’ Allen notes. ‘Some do it well, others less so. We are seeing links submitted [to Reddit] before the open access peer review process has looked at it and said it’s valid.’

Another potential problem when curating content online is that it’s easy for a rogue moderator to undermine the work of others. Even among areas of scientific consensus there are arguments, efforts to promote particular avenues of research and political ideologies that can pollute the debate. Allen is quick to acknowledge that such problems do happen, albeit rarely. ‘We’ve only had five or six cases where we’ve had to do something. Those were reported really quickly. If someone was going rogue, another person sees that immediately … we have enough mass of people that the watchers are watching the other watchers.’

Mabbett is similarly convinced Wikipedia has sufficient safeguards in place. Users are required to cite sources wherever possible, allowing others to check their work. ‘It works by consensus,’ Mabbett explains. ‘You discuss things until everyone is agreed … compromise doesn’t mean you reflect both sides of a dispute with equal weight. The classic example is evolution versus intelligent design … the balance involves giving it as much weight as it has in society.’

With so many inherent challenges to guard against, it would be easy to wonder why scientists would choose to volunteer their time at all. For Garcia, the benefits of explaining science to his forum users are obvious. ‘It keeps your chemistry knowledge up to date,’ he says. ‘Quite often I won’t know the answer off the top of my head … actually interacting with students and helping them come to the answer is one of the most rewarding ways of keeping your knowledge fresh.’

This sense of personal reward is also common among Reddit moderators, Allen says. ‘They are people who just enjoy explaining a field they are in. It’s a way of getting through the sensationalism and biases and the competing motivations to do things. But it’s hard.’

The good news is that it also doesn’t have to be time-consuming. ‘If you look at some of our moderators,’ Allen says, ‘it’s a half hour a week. We make no requirements. We have so many people, we can do it without too much of a load on anyone.’

‘A lot of people only make one edit [to Wikipedia],’ adds Andy Mabbett. ‘If that’s all they do, then we are grateful. Others do it on an ad hoc basis, others do it as a hobby … there are some people who only update articles with sports statistics, others just do technical files.’

Yet despite these flexible commitments, it appears that not enough scientists are getting involved. When Reddit comes up in discussion, Garcia immediately mentions Allen by name, chuckling as I confirm we’ve spoken. ‘It’s a small community,’ he laughs. ‘Everyone in the online chemistry community knows each other … but I hope it does become larger.’

For those looking to get involved, Garcia’s advice is simple. ‘Find something that you are passionate about and discuss that online,’ he advises. ‘Be part of a community. And if you can’t find one, you can start your own community … and people will come. One thing I’ve noticed about online is that there is always someone else out there that’s interested in what you’re interested in. And people want to talk about it.’

And as the science curation community grows, the need for greater expertise will only grow with it. ‘The Wikipedia mission is not to build a website, but to make the sum of human knowledge available in whatever form that takes,’ Mabbett observes. ‘Maybe one day Wikipedia will be a chip planted in all our heads.’

If that is what the future holds, it will be even more important that a scientist has checked the facts.

Members of the Chemistry World team will be answering your questions on Reddit’s science community on 21 January. We’ll be fielding any questions you have: whether you want to know how you can get a start in science journalism, are looking to discuss the latest research developments, or just want to know our favourite lanthanide or noble gas.