There are now more ways than ever before to complete your PhD, finds Kit Chapman 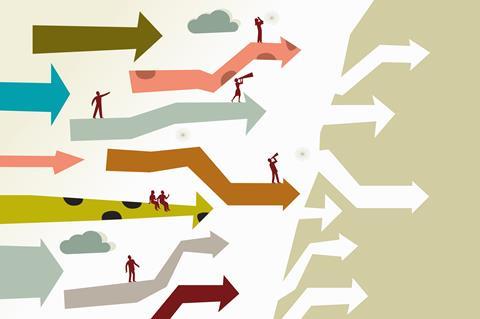 There are many different routes to calling yourself doctor

In 2020, while quarantined in a South Korean hotel room, I found myself sitting an unusual PhD viva. As with thousands of other students during the Covid-19 pandemic, the defence was done remotely via video link. The twist was that I wasn’t being assessed on a project I had completed under my supervisors; instead, I was being asked about work I had done before I’d even applied to the university. This was a PhD by published work, considering whether I had completed a rigorous body of scientifically valid, original research that was substantial enough to be considered worthy of academia’s highest qualification. And it’s just one of a growing number of alternative ways to complete a PhD.

While a ‘traditional’ PhD in the UK is often thought of as three to four years of study followed by a thesis, alternatives have been around for a long time, says Robert Bowles from the Royal Society of Chemistry’s careers team. ‘With the academic job market, there’s always a demand for publications to be competitive. If you can get a PhD and publications at the same time, that may be considered a benefit,’ he says. ‘Historically, numbers have always been very low for alternative routes, but an employer looking for a research scientist isn’t going to worry too much about how a PhD was achieved. They are looking for you to demonstrate the skills and knowledge that you’ve gained, irrespective of the route you’ve taken. It’s more important to be able to show you’ve got the skills relevant to your role than how you’ve got your PhD.’

PhDs by publication exist to recognise work done by someone who didn’t proceed straight into their PhD studies after completing their master’s degree, and yet have still produced a body of research. These are usually – although not always – done internally, by a university’s staff or graduates, rather than through a different institution. In my case, my supervisors were there to help me write a discussion document of about 15,000 words, which explained the wider context of my work and showed I understood the field’s underlying principles. This meant the PhD process was much faster than normal; I completed my PhD in six months, even though the work had taken several years.

This isn’t the only option, however; it’s also possible to follow the ‘traditional’ research path and still do a PhD through publication. It’s the route that Conrad Goodwin, now a postdoc at Los Alamos National Laboratory, US, took when he completed his studies at the University of Manchester, UK. ‘I was doing a thorium project, and it wasn’t working,’ Goodwin explains. ‘But I was always coming up with ideas, expanding on stuff that we’d already done. And the publications started rolling in.’ Rather than write up an overarching thesis, Goodwin and his supervisor David Mills decided to use those publications as a collected body of work to demonstrate his candidacy.

‘How you end with a thesis always depends on the student and how they interact with the supervisor,’ Goodwin says, crediting Mills’ approach and the university’s clear guidelines on what would be expected for a PhD. ‘I know plenty of students that could have done a PhD by publication but did not because their supervisor didn’t write up their results as they only wanted something ground-breaking. That’s a waste of public funding, the student’s time and the academic’s time. But my supervisor always helped me write things up and publish them.’

The decision to get his PhD by publication gave Goodwin valuable experience on how to put together a scientific paper and honed his ability to assess projects. ‘I could also help others, as it became easy to see the pitfalls,’ he recalls. ‘I could say “OK, but if we do this instead, make this compound, do some theory, then we have a publication!” That’s something that only comes with experience.’

Goodwin’s approach also gave him a vastly different viva than most candidates. ‘Rather than a target-oriented thesis, it was more like a demonstration of general knowledge,’ he says. ‘All my publications were combined with a brief 100-word introduction, as well as an explanation of what I’d contributed to each paper. If you want to look at my thesis, it’s my first seven publications and an introduction! In my viva I was mostly asked general undergraduate chemistry questions, because the advanced stuff I’d written about already and it had been verified by peer review.’

While Goodwin recommends the approach for anyone who’s interested in continuing in research, essentially giving them a career head start, it’s not right for everyone. ‘I don’t like my PhD thesis,’ he admits. ‘Not because of the work in it, but because I don’t have a bound copy. There’s something sentimental about having that nice, crisp volume, a continuous thing. Yes, there are huge benefits of doing it my way. But you also lose something, as your thesis defence becomes a box-checking exercise rather than a nice finale.’

For those considering a move out of academia, there are also PhDs that involve an industry-based placement. ‘A good example are the Cooperative Awards in Science and Technology (Case),’ explains Bowles, ‘which offer a PhD that’s almost sponsored by an industrial partner. This can be useful, because you can get what is effectively industrial experience as well as academic research experience.’

It’s an option that Ioannis Tsagakis took when he applied for The White Rose BBSRC Doctoral Training Partnership in Mechanistic Biology. The programme, run by the Universities of Leeds, Sheffield and York, UK, extends the student’s PhD programme from three to four years, but includes a three-month placement. ‘It was a slightly longer PhD, but that didn’t prevent me from applying,’ Tsagakis recalls. ‘I thought the internship would play a big role in better equipping me with the tools I need for a future career.’

The students have complete discretion on where they take their internship, usually in the second or third year of their PhD. ‘You’re encouraged to do something completely different to your PhD project,’ says Tsagakis, who is currently in his final year at the University of Leeds. ‘Mine was at a publishing company, FEBS Press in Cambridge.’ Although the Covid-19 pandemic meant Tsagakis had to complete his internship remotely, he still gained valuable experience. ‘It was really helpful, because it gave me another tool – how to conduct more efficient literature views, which will be happening later if I pursue a postdoc. I also wrote a news article on how Covid-19 affected cancer research funding. It was something I’d never done before, and even though it can’t be cited as an academic publication it was exciting to contact a lot of experts in the field and understand the wider research going on.’

Opportunities aren’t just limited to courses with established placements. Each year, the Royal Institution (RI) offers between two and four internships for PhD students eager to cut their teeth in science communication. This involves a three-month, fully funded, full-time placement, either in the RI’s digital team or assisting with its annual Christmas lectures. ‘People like having their science explained to them by scientists,’ says Daniel Glaser, the RI’s director of science engagement. ‘For us, having people who are communicating and have an active knowledge of science adds a huge amount of value to our production process.’

The move also benefits the doctoral student, Glaser explains. ‘Whether you’re staying in research or not, it’s integral to a scientific career to be able to communicate. That isn’t just with children, the public or journalists, but with other scientists too. Almost all research today is interdisciplinary, and as soon as you go beyond the limits of your discipline, you need to engage outwards. So, whether you’re shooting for a Nobel prize or choose to leave science, an internship that involves communicating is a really good idea for your own personal development. If you can speak in a way that others outside can really understand, that will stand you in good stead. Science communication within science is often very poor, and we can help.’

While internships aren’t common, doctoral students shouldn’t be afraid to take these opportunities if they’re interested, Glaser says. ‘Doing an internship should be something you’re proud of. It’s an integral part of your career as a researcher, and your group, supervisor and university should be proud that you’ve even applied. People should think of [internships] as an expected and valued part of a research career. I would strongly encourage people to be loud and proud as an intern, because it’s what we expect from our scientists these days.’

The downside to taking time out of your studies to do something different, Tsagakis says, is it takes time to get back into your own research. ‘Of course, when you leave for three months, and you come back, you feel like you don’t remember anything!’ he laughs. ‘Luckily, I had made notes before I left, so it wasn’t that difficult. And your supervisor is also there to facilitate your transition. For example, mine told me to start by doing some literature reviews, so I didn’t have to go back in the lab straight away.’

Whether it’s by publication or a course involving an internship, anyone considering a PhD by an alternative route still needs to ask the same questions they would about more traditional pathways. ‘People from different backgrounds will need different levels of support,’ Bowles says. ‘So always make sure there’s awareness about your course in the department you’re working in, that they can provide you with the support you need, and that your supervisor has a clear plan for you when you start the programme.’

With a host of PhD options out there, it means there’s something right for everyone, which can help support a more vibrant and diverse chemistry community. And, however you choose to complete your PhD, I know from personal experience there are few more satisfying moments in life than being told you’ve passed and can finally put the title ‘Dr’ in front of your name.