AstraZeneca is investing in the future of drug discovery with its new graduate training scheme in pharma. Manisha Lalloo finds out more

Innovative science lies at the heart of biopharmaceutical giant AstraZeneca. But, although the company is dedicated to developing its scientists to drive this innovation, on closer inspection it realised there was something missing: new graduates.

‘Because we’ve been in a period of recession, in big pharma we’ve been downsizing and recruitment of young scientists hasn’t really been happening,’ says Jim Lynch, vice president of quantitative clinical pharmacology at AstraZeneca. In the past, graduates were recruited to the company when vacancies arose, but with no formal scheme to bring graduates on board, AstraZeneca found itself with an ageing science demographic. ‘We looked at that early science talent and said we need to address that,’ says Lynch. The result is a two-year graduate programme, launched last year within the Innovative Medicines and Early Development biotech unit. 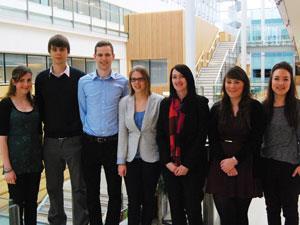 The graduates will each work in three different research areas

The programme joins the company’s well-established postdoctoral and sandwich placement schemes. Recruiting graduates to research sites in the UK, Sweden and the US, Donna Watkin, AstraZeneca’s global graduate programme manager sees the scheme as key to developing talent early.

She explains that graduates undertake three eight-month rotations, doing science across the company’s research areas, using leading-edge technologies and state of the art facilities. ‘For example, a chemistry graduate could come in and do eight months in a synthetic chemistry environment making compounds, then spend eight months in a bioanalytical chemistry lab measuring analytes – maybe a drug or a metabolite in blood – before another rotation in a structural chemistry environment doing computational chemistry,’ Lynch continues.

The programme not only develops graduates’ chemistry skills but also delivers the training to help them become scientific leaders. A series of workshops bring graduates together to work on softer skills such as presentations, project management and problem solving. ‘All of the things a recent graduate would need to be successful and make that transition into industry,’ says Watkin. ‘We’re giving them a foundation to support the technical skills and development they’ll get in the role.’

The company currently has 17 graduates across its UK, Swedish and US sites. Watkin envisages the new recruits forming a global network both virtually and in person, and says they may have the opportunity to undertake placements overseas. The graduate programme team is also investigating options for graduates to complete PhDs at the end of the two years, while still working with AstraZeneca.

Among the seven new recruits at AstraZeneca’s UK site in Cheshire are Kathryn and Lindsay who started in September 2013. After completing sandwich years in industry, both were attracted to the diverse opportunities.

‘I wanted to broaden my knowledge at this stage instead of focusing on a PhD,’ explains Kathryn. ‘The interdisciplinary feel of the programme and the opportunity to do rotations around different areas of drug discovery really appealed to me.’

‘It’s very flexible,’ adds Lindsay. ‘We’re encouraged to seek other opportunities and talk to people in different departments to see where we’d like to go in our next rotation, so you can get a taste of as many different things as possible.’

Even at this early stage, the graduates say they are given real responsibilities. ‘Immediately I’ve been put on an important project and encouraged to take a leading role,’ says Kathryn. ‘Hopefully I’ll be able to do that throughout my rotations and to see the impact that my work has had while I’ve been on this programme.’

Both Kathryn and Lindsay had completed industrial placements before being offered a place on the graduate scheme, but Lynch is keen to stress that this is not a requirement: ‘We’re looking at their abilities both scientifically and interpersonally to interact with teams,’ he says.

‘We’re looking for a passion for science and a passion to make a difference in drug discovery,’ adds Watkin. ‘Essentially what distinguishes them is their drive and their commitment to really wanting to make that difference.’

In fact, the graduates are already making a difference, says Lynch. ‘What’s great about this graduate scheme is starting to work with young scientists again. Getting that level of passion is really energising for other scientists in AstraZeneca.’

Although still in its first months, the scheme is growing. Seven more graduates started at the Swedish site in November 2013, with a further three following in the US in January 2014. And recruitment for next year’s larger cohort of graduates is well underway. ‘It’s win–win all round,’ says Lynch. ‘We get great work out of these scientists – and they do real science as well. It’s really exciting.’