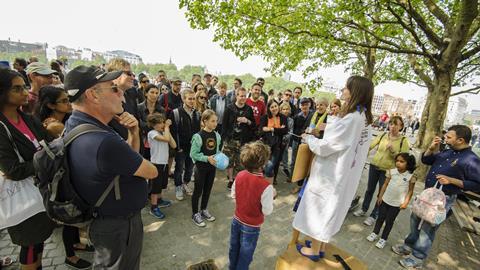 This summer, come rain or shine, lone women scientists will head out to urban locations to talk about their research in public. With a prop or two and a soapbox, each woman will have an hour to catch the attention of passers-by and regale them with stories about science.

The speakers are all part of a project called Soapbox Science, which aims to promote women scientists and their work. The initiative was founded in 2011 by Seirian Sumner, an evolutionary biologist at University College London, and Nathalie Pettorelli, an ecologist at the Institute of Zoology, in a bid to ‘challenge the perception of who scientists are’.

‘Our motivation was driven by a series of personal experiences and realisations,’ says Pettorelli. ‘[There are] fewer and fewer female role models available in science as you progress up the career ladder,’ she says.‘Sexism in science is alive and kicking, if you allow yourself to notice it … science stories are mostly told by males, and celebrated science heroes are mostly male.’

‘Soapbox provides role models at all levels of the career ladder,’ explains Sumner. ‘It’s not just about encouraging young women into science. It’s about providing role models for the women already in science, to encourage them to hang in there.’

Soapbox scientists need to be PhD level or higher. Despite the fact that many of the speakers are highly experienced lecturers, pre-performance jitters are common. ‘Unlike lecturing, you haven’t got any back-up slides or pictures. It’s literally you and a box,’ says Emily Bell, Bristol’s Soapbox Science coordinator and a zoologist studying the social behaviour of insects. ‘Most people are really nervous when they start but we have to drag people off by the end.’ 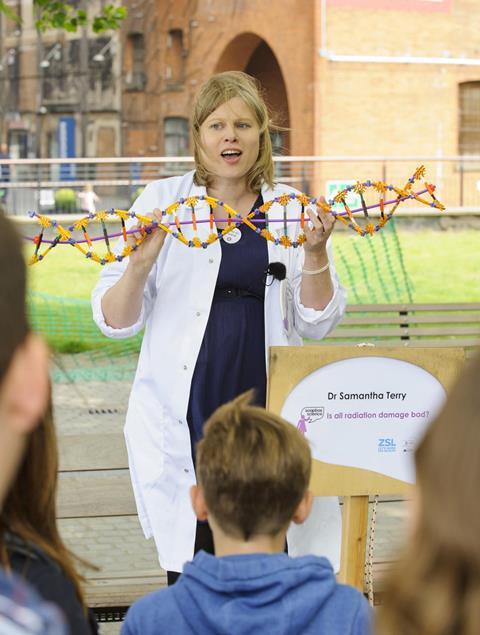 Bell has spoken at two Soapbox sessions. She usually starts with a really simple question focused on her research, calling out ‘Do you like wasps?’ while holding a giant Papier-mâché prop of the insect. ‘What’s really nice is that none of our speakers are miked up, so it’s a proper conversation,’ she adds. ‘The public have to be quite close and it turns into more of a discussion than a presentation.’

This year, Leila Moura, a chemist at Queen’s University Belfast (QUB), Northern Ireland, will talk about clouds and crystals to illustrate phase equilibria. She is keen to share her enthusiasm for science. ‘I want to show people that it’s not hard. Anyone can do it.’ With Soapbox, you get ‘exposure and visibility, which female scientists usually don’t have,’ she says.

Sara Schmidt from the University of Edinburgh, Scotland, will talk about 3D printing and cells. ‘When I heard about the female aspect I got really interested because I am passionate about women in Stem [science, technology, engineering and mathematics],’ she says. ‘I think it’s really important to get girls enthused early on.’ With many children in Soapbox audiences, Schmidt is hopeful that she can make a difference. ‘If I can inspire just one person it would be good.’

As a chemical engineer at QUB, Nancy Artioli will use her 2017 Soapbox session in Belfast to talk about ‘car chemistry’, discussing how her work on catalysis is applied. She feels lucky to be at QUB, where the number of female lecturers in chemical engineering is increasing. ’But I think that women need to stand up and say that we are doing outstanding research.’

Soapbox Science has expanded year on year. In 2016, there were 13 events in the UK and Ireland and one in Australia. This year, over 150 women are involved in 16 events with three overseas, in Germany, Australia and Canada. ‘Soapbox Science increases by itself. As long as we have strong teams in place there is no limit to where it can go,’ says Isla Watton, who works full time on coordination and training for the project. 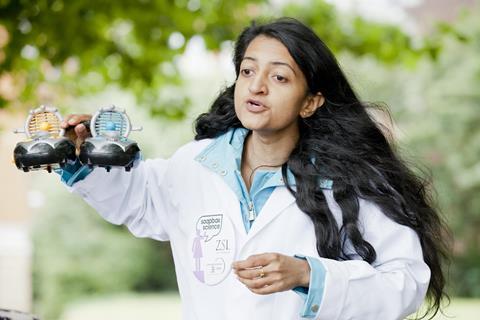 Local organisers select candidates – 12 for each location – to ensure a good spread of experience and topics. Those selected receive a day’s training. ‘It’s a chance to meet everyone. People share expertise – some of the women are really senior,’ says Watton. ‘We cover things like how to engage with an audience that is not science-specific. Soapbox is a unique event because people are just walking past.’ Many former Soapbox speakers stay in touch with each other, she says. ‘It builds a bit of a community.’

‘Outreach is such an important part of people’s grants now – they have to show evidence of work in public awareness of science,’ says Bell. ‘We want people to flag Soapbox science in their departments as a valuable way of doing outreach.’

To volunteer as a local organiser or speaker, apply via soapboxscience.org