Paul Murray never expected to be running his own business. But when pharmaceuticals giant AstraZeneca closed the site in Avonmouth, UK, where he worked, something had to change. Reluctant to relocate, he was conscious that job prospects for chemists in the area were grim. But he also knew that despite closures across the sector, there was strong demand for R&D support in his field of process development.

So, in early 2011, Murray and four of his colleagues took advantage of their employer’s voluntary redundancy package and set up on their own. The result is CatScI, an expert service provider and consultancy focusing on the optimisation and development of catalytic chemistry. All five chemists are directors and equal shareholders, having contributed a proportion of their redundancy payments to fund the business. 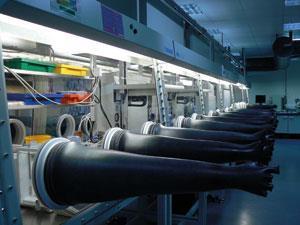 This is not, however, the sort of company that can be started on a shoe string budget in a garage. ‘Everyone says to keep your overheads low,’ says Murray. ‘But CatScI has high overheads because of what it does.’ By chance, a contact directed the team to Cardiff Council, who offered CatScI a lease on an industrial unit, with an initial rent-free period, a reduced service charge and a grant towards the fit-out.

The initial set-up included the installation of fume hoods, gas supplies, extra electrical capacity and an IT system. And while the team were able to acquire from AstraZeneca much of the equipment that they needed to set up their laboratory, they had to relocate and install it themselves. ‘We moved 16 tonnes of equipment in 48 hours,’ says Simon Tyler, the operations director.

With the facilities up and running, the company also needed clients. ‘We held an open day last November, which attracted people from around twenty different companies,’ says Murray. ‘We also attend conferences and trade shows and visit interested customers to give talks on our work.’ This need to sell does not always come easy to scientists, though. ‘Sales is the most difficult bit,’ says Ross Burn, analytical director. ‘It’s like being on Dragon’s Den every time’.

The key to success, the team agree, is networking. ‘People sell to their friends, so we need to establish relationships,’ says Tyler. This helps the company to understand the needs of potential clients and means that people think of CatScI when they need R&D support. ‘You have to keep selling to keep yourself in people’s minds,’ Tyler adds. ‘You don’t need to be Alan Sugar, but you do need to be focused and driven.’

With each member of the team bringing different skills, the five decided up front who would be responsible for different aspects of their work, such as project development, client management and health and safety compliance. ‘We all have two jobs,’ says Tyler. ‘One is doing the science and the other is running the company.’ This can lead to some difficult choices. ‘You can never do everything,’ counsels Murray. ‘We all have lists. You have to prioritise.’

This pressure can also take its toll on life outside work. Visiting potential clients and attending conferences around the world means a lot of time on the road. And tight deadlines for proposals and funding applications can lead to long hours in the office. ‘It’s not great for your work–life balance,’ admits Murray, ‘but it is about the longer term and that makes it a little bit easier.’

Running their own company has, however, changed how the team view their work. ‘In a big company, I felt that I was responsible for my projects but didn’t feel that I had a responsibility to the people around me,’ says Murray. ‘Now I feel I have a responsibility to everyone involved.’ It has also helped the team to develop valuable new skills. ‘Starting up a business, you’ll be on the steepest learning curve you’ve ever been on,’ he adds.

And after just over a year in operation, Murray and his colleagues feel that all the long hours and hard work has been worth it. But would they encourage others to follow their lead and set up on their own? The answer is, by all accounts, a resounding ‘yes’. ‘Once you’ve run your own business,’ says Tyler, ‘you won’t want to work for anyone else.’