Can an apprenticeship offer a genuine alternative to a university degree? James Mitchell Crowe investigates

Taking a university degree was once a sure route through the bumpy territory between education and employment – university leavers were all but guaranteed an attractive graduate position. But times have changed. Today, graduates jostle for posts in a crowded job market, and in many parts of the  world a university education has become an increasingly expensive undertaking.

When considering this situation, governments around the world typically cast an envious eye towards Switzerland. According to the latest Organisation for Economic Co-operation and Development (OECD) figures, Switzerland’s youth unemployment figures are consistently the lowest of any member country, just 7.7% of its 15–24 year olds looking for work in 2011. Contrast that figure with the OECD average of 16.2%, and it becomes clear just why the ‘Swiss system’ is so coveted.

The key to the Swiss success is a dual-track approach to late secondary and tertiary level training. ‘In Switzerland, apprenticeships are the standard pathway for starting your career,’ explains Lutz-Peter Berg, science and technology attaché at the Embassy of Switzerland in London, UK. ‘About two thirds of people between the age of 14 and 16 take up an apprenticeship,’ he says. This vocational approach embeds young people in the workplace, where they typically spend the bulk of their time, attending vocational school for one or two days per week.

A significant proportion of Berg’s time is now taken up with the UK government’s desire to adopt a similar system, reviving the UK’s once-extensive apprenticeship scene. ‘In the UK there is a very strong interest to reinvent the apprenticeship system and build a large and high quality apprenticeship scheme again,’ he says. 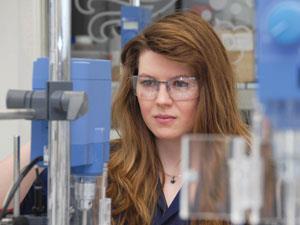 Emma Brown earns while she learns on Unileverâ€™s apprenticeship scheme

Apprenticeships are traditionally viewed as an alternative to late secondary education, but the UK government is driving the development of ‘higher apprenticeships’ – a vocational alternative to a university undergraduate programme that confers a degree-level qualification.

Sakhardande and her colleagues are currently completing a government-funded project to develop the higher apprenticeship framework for science. The framework they have established incorporates six possible pathways: chemical science; life science; food science; process development; packaging development; and healthcare science. ‘From the creation of new molecules through to the biological testing, and scaling up from bench to pilot plant to production scale, and then putting that into the right packaging, all of that area of R&D is supported through these higher apprenticeships.’ According to Sakhardande, these pathways should take apprentices just as far as a conventional university degree.  Launched last year, the first cohort of apprentices has now started along the chemical sciences pathway.

For school students considering a chemistry career, the new scheme offers a clear advantage: graduate status without the traditional university route, and therefore without the associated fees. But will the idea appeal to employers? Mere months into the programme, evaluating apprenticeships at this early stage is hard. But certain companies were a step ahead in offering such schemes, and their experiences suggest that the outcomes could be positive for all concerned.

Emma Brown is half way through the third year of a four year ‘R&D apprenticeship’ programme with Unilever that, like the higher apprenticeship system, will take her through to graduate level. Unilever’s Port Sunlight established the programme three years ago, and Brown was one of the first three apprentices.

To get my degree paid for, and four years work experience, it’s a no brainer

Brown had already secured a place at university after finishing her A-levels when a family friend mentioned the programme at Unilever. She applied, and was offered a place. Deciding whether to accept the Unilever offer was easy, she recalls. ‘To get all my degree paid for, have no debt at the end and four years of work experience, it was a no-brainer really!’ she says. ‘So many people I know have graduated and not been able to get jobs, because it’s all about having work experience.’

Despite the obvious pressures on her time – juggling work with study at the University of Liverpool – Brown says that her friends are envious of her position. ‘I get a salary, so it’s like getting paid to study. I’m better off than they are plus I’ve got all this experience, so they’re pretty jealous!’ Brown says that her busy working week demands excellent time management skills, but although she has less free time than her university friends, she hasn’t found the gap to be too great. ‘I haven’t really struggled with that too much, I’ve still got a life.’

The guidelines for what constitutes a higher apprenticeship are strict, says Sakhardande, but the framework has been designed to offer employers and apprentices as much choice and flexibility as possible. For example, to complete their ‘level 5’ qualification, chemistry apprentices can study for a foundation degree via distance learning, or attend a local further education college. Depending on the employer, some higher apprenticeships end at this point, while others continue on to the full degree – level 6 – which can be completed part time at any university.

With the apprenticeship framework now in place, two key challenges remain: encouraging universities to offer suitable courses and persuading employers to join the scheme. ‘Some employers are used to employing apprentices in a manufacturing setting, so they understand it,’ says Sakhardande. ‘Other companies, smaller life science companies for example, have never come across apprenticeships, but once they understand the scheme they are quite enthusiastic. To have companies like Unilever flying the flag is very helpful,’ she adds.

In February 2012, the Cambridge, UK, research arm of Japan-based pharmaceutical company Takeda became the first company to take on a higher apprentice. The company considers this route to be just as valuable as the graduate route into drug discovery. ‘Our entry level criteria are the same as those for university entry,’ says Linda Millett, head of human resources at Takeda Cambridge. ‘Our apprentice would have gone to university had it not been for the high tuition fees. 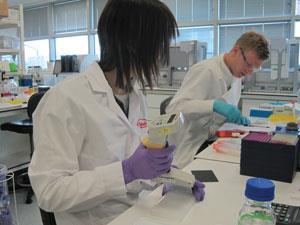 ‘We still recruit graduates, I was just interested in offering a different career pathway for young people into our industry,’ Millett adds. ‘I feel that the pharma industry has always gone down the graduate route without looking at alternatives.’

For those who choose a higher apprenticeship, Millett sees their career prospects as equal to a university graduate, if not better. ‘Some of the graduates we take in can take a while to settle into the work environment. Someone who has been in the workplace for three years, I think they’ve got an edge – even over a graduate with an industrial placement year.’

Millett is also keen to stress the broad benefits for the host company in taking on a higher apprentice. The research group hosting the company’s first apprentice has united around her, and having an apprentice provides mentoring opportunities for existing staff, as well as extra manpower. Recent Swiss figures show that, in 2009, offering apprenticeships cost Swiss companies 5.35 million Swiss Francs (£3.76 million) – but the productive output of apprentices reaches 5.82 million Swiss Francs.

Millett has been working closely with Cogent to promote higher apprenticeships, and says that other pharmaceutical companies, including GlaxoSmithKline, are following suit. She adds that apprenticeships are particularly valuable to SMEs. ‘They need graduates who can come in and hit the ground running – well, this gives them the opportunity to train people within their company.’ SMEs such as SI group, Union Colours and Perrite are all now hosting apprentices.

The greatest hurdle remaining may simply be convincing the wider community that higher apprenticeships are equivalent to a university degree. ‘It’s about changing the mindset,’ Millett concludes. ‘I think that there is still some stigma associated with apprenticeships and I think that we need to move away from that. It is a very good alternative career pathway for young people.’