How to change research area 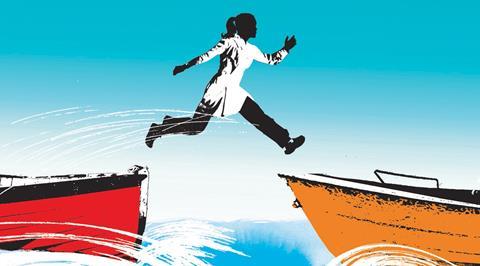 Is it time to jump ship and sail away on a new voyage of discovery?

Changing academic research areas can be a career risk, but it can also spark a new enthusiasm for chemistry. Valery Kozhevnikov at Northumbria University, UK, knows this well. He has switched fields several times over the last 20 years; from a PhD in medicinal chemistry to postdoctoral fellowships in supramolecular materials and liquid crystals, and his current focus on phosphorescent metal complexes. He admits it wasn’t always easy, but says he has ‘no regrets whatsoever’.

Switching research area is still rare in chemistry according to Kozhevnikov, who says academic culture expects researchers to stick with the areas in which they have trained. But a recent analysis of publications by physicist Shlomo Halvin from Bar-Ilan University in Israel and colleagues suggested that switching between topics is becoming more common, perhaps due to an increased emphasis on interdisciplinary research.1

If you’re considering a jump to another research area, it’s good to look before you leap. Here’s some advice on how to tackle the hurdles ahead of you.

Deciding when to switch areas is fraught with difficulties. ‘Our results suggest that narrowing down the research focus early in a career might be better,’ says Halvin. At later career stages, ‘high switching probability is associated with high productivity, but associated with low average citation per paper’.

Switching after a PhD seemed like an ideal time for Kozhevnikov. ‘I had a lot of enthusiasm and energy and other people did not depend on me, so if I made a mistake it would not cause much harm.’ Several international postdoctoral fellowships helped him change area. Through these he could embark on new projects of his own design, rather than having to apply for jobs for which he might have been considered unqualified.

The key to any switch is planning. PhD students and postdocs should start to plan ideas for a new research topic – and think about how to fund the work – at least six months before the end of an existing project. Academics with permanent research positions can be even more strategic and plan five years ahead.  ‘You can be quite adventurous,’ suggests Kozhevnikov.

Make the most of existing skills

Giacinto Scoles at Princeton University in the US is a pioneer in the development of molecular beam methods for studying molecules. In the last decade, he has moved towards medical nanotechnology. He points out that ultimately ‘good training in science doesn’t depend on the subject’. Bringing a fresh perspective to a scientific question, unencumbered by old ways of thinking, can be a real advantage. Kozhevnikov has done just that. ‘You have to figure out your strength and then try to exploit it as much as you can,’ he says. ‘I’m still a synthetic chemist, so my strength is that I can quickly make the molecule … I usually make the material and then I knock on the doors of collaborators.’

Being accepted into a new academic community is the most difficult part of shifting research focus, says Scoles. Kozhevnikov agrees: ‘Experience and a reputation are strange things. The longer you spend in one field, the more difficult it is to change.’ Attending conferences, symposia and other meetings will all add to your visibility but recognition and acceptance really only comes with publications and conference talks.

Collaborations can also help a researcher to find their place in a new field. Kozhevnikov found collaborators through conferences, but suggests starting with small collaborative projects in your own department or university. ‘Maybe the best collaborator is in the office next to you,’ he adds.

Becoming part of a new academic community will mean reading new journals and finding new meetings, conferences and specialist subject groups. It could also mean identifying new sources of funding. Submitting proposals to an unfamiliar agency will be even more time consuming than the usual grant-writing process.

To provide enough of a track record for people to start taking you seriously ‘you have to publish at least three papers, ideally in good journals,’ says Kozhevnikov. He estimates that others only started to associate him with his current metallic complex research four years after he made his first compound.

Of course, there is risk involved and switching your study area simply to follow the funding or a passing interest is not a good idea. ‘You have to have enthusiasm [for] a new area of research, otherwise it will not work,’ adds Kozhevnikov. Scoles says those planning on switching research areas should probably give up any dreams of receiving prizes in Stockholm. But for those with real passion, the challenge of switching research areas is a reward in itself.