Humour at work is no joke 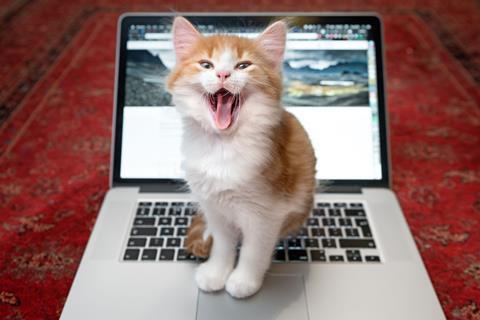 It’s not comedy until the cat lady sings

The best days at work leave me in tears. Tears of laughter, that is. The Chemistry World crew are a funny bunch, and it doesn’t take much for one of us to turn an innocuous situation into something absurd. I would share some examples, but I doubt I can describe the effects of a well-timed gif well enough to convince you that it was in any way amusing.

Even if I could, you still might not find us funny. A sense of humour is a highly individual and varying taste – even something you find hilarious one day might not be so funny the next.

Humour is even more difficult to get right in corporate communications. In part, this is due to the inherent purpose of these messages: if you’ve got something important enough to say to an entire workforce or sector, it’s unlikely to be of a frivolous nature. But even less-serious messaging should deploy humour with care, as the managers of an office building in Toronto, Canada, found when they tried to welcome employees back after a long period working from home. Signs in the lobby featured statements like ‘Miss your sweatpants yet?’ and ‘Bet your dog’s missing you’. After backlash, the company apologised, claiming the signs were ‘an attempt to be lighthearted’. Quite why they expected anyone who’s commuted across a city at rush hour to be feeling jolly about their pet’s loneliness is not clear.

Jokes don’t always land as the joker intends them to, and can hurt or alienate others. There are also things that should always be taken seriously, like chemical safety. But that doesn’t mean jokes should be banned from the workplace. Used appropriately, humour bonds a team together, and helps those working in challenging situations to mitigate or relieve some of the stress and distress they face.

Encouraging humour makes it even more important for employers to foster a culture of openness, where you can challenge what other people say and call them out safely when their behaviour is objectionable. It also requires having strong policies in place that make it clear that derogatory and offensive language are not acceptable, and that ‘it was just a joke’ never absolves anyone from the consequences of their actions. On an individual level it also means really listening to and accepting criticism, taking responsibility for your own words, and being aware of how you might be excluding people unintentionally – for example, by overusing unexplained in-jokes or specific cultural references.

For the wannabe workplace comedian, a supportive, inclusive environment has a further advantage: happy, relaxed people will be more likely to enjoy your jokes. Or at least humour you by pretending to laugh. So leave the edgy routines at home, and concentrate on spreading joy among your colleagues. Make them cry the right sort of tears.