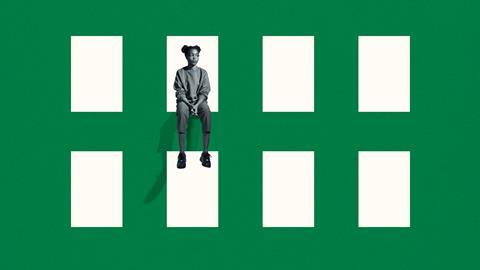 Imposter syndrome – loosely defined as doubting one’s own abilities and feeling like a fraud – is known to be pervasive in academia, and it can seriously hobble or even end a person’s scientific career. Now, researchers are trying to unpack the phenomenon in order to curb it.

New York University (NYU) psychology professor Andrei Cimpian was involved in a study several years ago that showed women and African Americans are underrepresented in careers where success is perceived to depend on high levels of intellectual ability. Then, just last year separate research he participated in revealed that men are more likely than women to be seen as ‘brilliant.’

Those two discoveries led Cimpian to wonder whether women and underrepresented minorities have stronger impostor feelings in careers where success is perceived to require raw talent or brilliance for success. Together with colleagues from NYU and partners at the University of Edinburgh, UK, he analysed the survey responses of nearly 5000 academics from more than 80 fields across the natural and social sciences.1 The survey participants, who ranged from graduate students to tenured faculty, rated their level of impostor feelings and how much special aptitude their field requires.

The results showed that the more a field was perceived to require brilliance, the more women – especially women from traditionally underrepresented racial and ethnic groups – reported feeling like impostors compared to other groups. Interestingly, the reverse was seen among men from underrepresented groups. 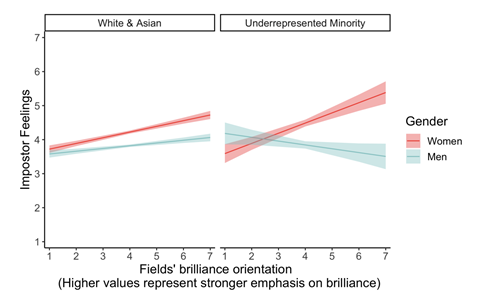 Among the 4870 survey participants, 194 were chemists. ‘Their reported imposter feelings were at the upper end – the average in chemistry for men and women was 4.34, and that is among the higher values,’ Cimpian tells Chemistry World. Among women in chemistry, the reported imposter feeling was 4.84, versus 4.0 for men. The average imposter syndrome scores across all 80-plus disciplines included in the study for all genders was 4.01 – 4.23 for women and 3.78 for men – ranging from a low of 2.66 in dentistry to a high of 6.60 in law.

‘The belief that you have to have an innate intellectual fire power might present an obstacle to members of groups portrayed as not typically possessing that brilliance, like women and underrepresented minorities,’ Cimpian explains.

‘Based on previous research, it is likely that women from these groups have stronger impostor feelings in brilliance-oriented fields because they are targeted by negative gender, racial, and ethnic stereotypes about their intellect,’ stated Melis Muradoglu, a NYU PhD candidate and lead author of the paper.

Brilliance-oriented fields have failed to create an environment in which women, particularly those from groups underrepresented in academia, feel capable of succeeding, the researchers conclude in the paper. They suggest that Stem fields, including chemistry, can be more welcoming if those in positions of authority are mindful of the atmosphere they create for aspiring members of their field.

‘If you look at your early career award and lifetime achievement award winners, and you see only white men, then that sends a message that this is the group that is most likely to be successful in this field, and that too can have significant implications,’ Cimpian states.

Dontarie Stallings, a chemistry and biochemistry teaching professor at the University of California, San Diego and associate director of the Open Chemistry Collaborative in Diversity Equity at Johns Hopkins University in Maryland, agrees. ‘The findings reinforce the sentiment that demographics matter – if you want to have a system built where talented people can flourish, then they must fit the mould of success – they need to see among their professors and fellow students others that look like them,’ he says.

Stallings recalls that he was one of the first African Americans to earn a PhD in chemistry from the University of Alabama when he graduated in 2006. ‘That is not a positive thing,’ he says, ‘that made my time there more difficult, but I was lucky in that I had individuals around me who supported me – I saw their capabilities and knew that I could be successful.’

He is baffled by the study’s finding that the impostor feelings reported by men from underrepresented minority groups actually decreased with their field’s brilliance emphasis. ‘I am surprised by the inverse correlation,’ Stallings says. ‘From my experience as a black male faculty member … the majority of the individuals I have interacted with have battled with imposter syndrome.’

Cimpian and colleagues suggest that this inverse relationship could be due to a relatively strict set of masculinity norms that may lead men from underrepresented minority groups to avoid reporting that they perceive their field to value brilliance and that they feel like impostors.

Scott Page, a University of Michigan professor whose research focuses on modelling diversity in complex social systems, can’t help but wonder about the consequences of female academics having greater feelings of imposter syndrome. ‘Does this influence the research projects that women undertake – do they steer away from potentially breakthrough topics?’ he asks. 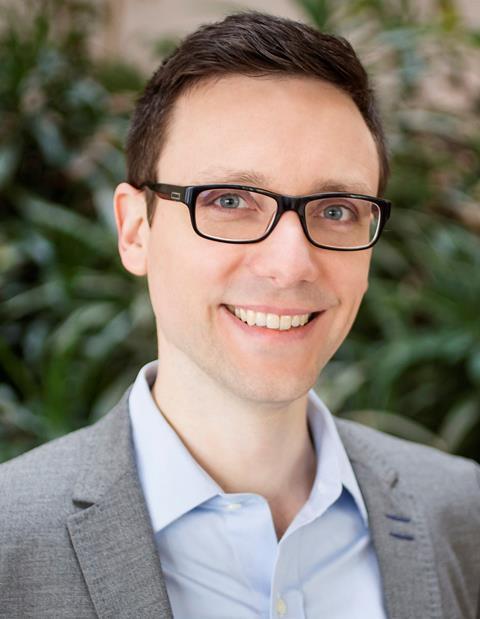 While Cimpian’s team used self-reports and the opinion of those surveyed to measure how much a field prizes ‘brilliance’, Page says it would be fascinating to know how this metric correlates with the technical requirements, size and breadth of that field.

‘For example, in mathematics, many professors can only understand the research of a handful of other people in their department. That has to breed imposter syndrome,’ Page states.

Stallings calls the new NYU-led study a ‘great beginning’, and says it provides a good opportunity to try to understand imposter syndrome on a field-by-field basis. ‘They fundamentally found a new quantifiable context for this discussion,’ Stallings says.

Indeed, Cimpian does plan a deeper dive. ‘This is by no means the end of understanding the mechanisms by which these beliefs about brilliance undermine diversity,’ he says. ‘We will pursue additional questions about what it is about the culture of these fields that undermines diversity.’