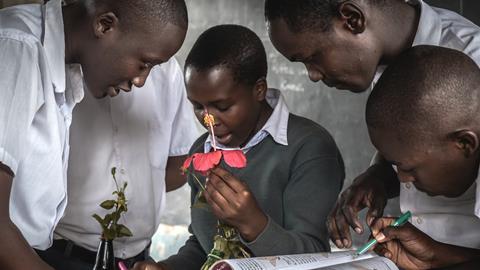 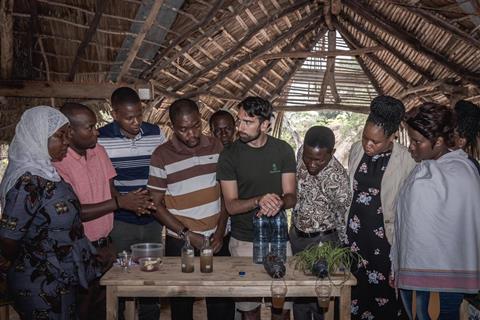 Education in certain African countries faces many challenges. Some schools have limited access to water and electricity, let alone updated books and educational materials. Italian chemist Michele Raggio wanted to change this and so created non-profit SeedScience, which aims to build a self-sustained science education programme in developing countries. Since its foundation in 2016 – with the support of the National Geographic Society – SeedScience has reached over 6000 students in Ghana, Kenya, Uganda and Tanzania, and has trained dozens of local science teachers.

Raggio studied chemistry, but his experience in science communication and volunteering inspired him towards a career change. He created SeedScience with an odd goal in mind – it should soon become unnecessary. ‘Ideally, we disappear after finishing our trainings, we want to create a sustainable model,’ Raggio says. However, he remains realistic: ‘Educational initiatives like ours will likely be needed for the next 10–15 years; after SeedScience grows self-sustained in one community, we will find new places to start over.’

The SeedScience team identifies the most passionate science teachers and offers them the opportunity to grow professionally. ‘We select around 15 people from different schools and train them for three months,’ continues Raggio. After that, the teachers keep in touch with each other organising regular meetings to prepare the training plans for the next year. ‘Trainees become trainers, it’s like a good pyramid scheme,’ he jokes. According to SeedScience’s predictions, once the programme reaches half of the science teachers in an area, it becomes independent and can survive on its own. ‘Colleagues support each other, and often secure some financial support from school administrators,’ adds Raggio.

Instead of chalk, board and masterclasses, SeedScience uses eye-catching, hands-on experiments. ‘We let kids observe, without explaining the results beforehand,’ says Raggio. This adaptation of the classic scientific method builds interest and passion simultaneously. It also teaches how chemistry – and science in general – can help tackle relevant issues such as water purification, energy generation, deforestation and climate change. Raggio remembers a particular moment in Tanzania, a year ago, when a class of 10-year-olds learnt the importance of using soap to disinfect their hands: ‘We showed how soap cleans using a simple demonstration with oil and water,’ he says. ‘Students were truly amazed.’ Surely, these moments are priceless, especially amid a pandemic.

Against all odds, Covid-19 only slightly altered SeedScience’s activities. The team in Italy managed to organise some training sessions online, albeit hampered by slow internet speeds, and then local teachers continued working on their own. ‘This proves our system works,’ says Raggio. To further test their sustainability concept, Seedscience will organise its first training programme without international staff next year.

SeedScience expects locals to kick-off side projects – such as science outreach events – to generate small amounts of income. Luckily, activities are cheap. ‘We manage to carry out experiments with stuff you can buy at the local market,’ says Raggio. Samuel Addo, now a science teacher in Ghana, was blown away by this: ‘I always thought science required precise tools and equipment,’ he says. ‘However, we only use cheap, accessible materials, easy to get anywhere in our community.’ Addo loves to showcase the colour changes of acid-base reactions. ‘However, we didn’t have pH indicators, we had to improvise and use an extraction from hibiscus leaves,’ he adds. ‘It worked perfectly.’ Now, he has introduced this unusual method in his own trainings.

Evans Anderson, another teacher in Ghana, was also captivated by the initiative. ‘Before, I deemed practical lessons irrelevant and boring,’ he says. ‘SeedScience showed me how to make my classes engaging and interactive, and my students’ performance has greatly improved.’ Both Addo and Anderson are now qualified trainers themselves, who hope to share what they’ve learned with educators across Ghana. 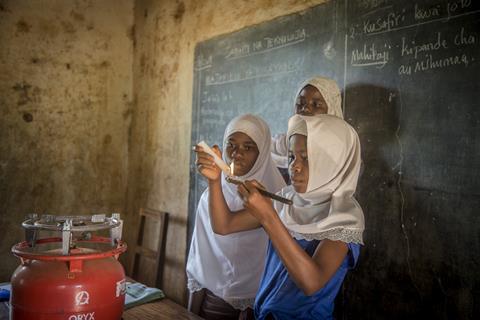 The impact of the programme goes beyond science. A year ago, SeedScience local partners in Ghana wrote and submitted their first funding proposal, and they succeeded raising £9000. ‘This is a much harder endeavour than it seems, the access to information and donors there is much smaller,’ explains Raggio. Moreover, the same team recently reapplied for the same grant and doubled the reward. ‘Their second application went above and beyond, incorporating new ideas on educating girls and the importance of gender balance,’ he adds. In fact, this is another pillar SeedScience focuses on. Their last teacher training quadrupled the number of women, which now represent 25% of the class, and most of the on-site volunteer trainers are women. ‘Our goal is to bridge the gender gap and empower female teachers and scientists to become engaged role models – having real-life examples is really inspirational.’

Addo and Anderson were inspired themselves – training with SeedScience encouraged them to pursue further studies. ‘I want to pursue a career in education, to make science accessible to all,’ says Anderson. ‘The impact this project had on me was superb!’

CV: BSc and MSc in Chemistry, and a PhD in Materials for Materials for Health, Environment and Energy, at the University of Rome Tor Vergata, Italy. Former science animator and communicator for Ludis and a volunteer in environmental and education projects in different countries in Africa and South America.

What next? Grant full sustainability to SeedSciences projects and return to the African continent to offer support to teachers and schools.