An early fascination with chemistry grew into a remarkable research career for Katherine Holt. Yfke Hager meets her

An early fascination with chemistry grew into a remarkable research career for Katherine Holt. Yfke Hager meets her

It was perhaps inevitable that Katherine Holt would become a chemist. Her parents are both chemistry teachers, and she spent her childhood surrounded by chemistry books. Now, the young researcher hopes to inspire enthusiasm in the next generation of chemistry students herself.

As a child, Holt enjoyed spending time with her father in his school laboratory. ’I watched him dip dirty pennies into acid to make them shiny, and thought it would be cool to work in a lab,’ she recalls. Holt discovered a natural talent for chemistry during her secondary education, and went on to read chemistry at the University of Oxford, UK. It was a happy time, she says, but in her early student years she wasn’t certain that her future lay in research. ’I didn’t feel very confident in the lab,’ she admits. 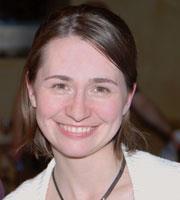 That completely changed during her fourth year at Oxford, when Holt gained her first experience of a real research project. ’I wanted to work on something relevant,’ she says. Surface scientist John Foord’s research on thin diamond films created by chemical vapour deposition caught her imagination. ’It seems a romantic notion, working on diamonds,’ Holt laughs, ’but the research has so many applications, which really appealed to me.’

Having created highly conductive boron-doped diamond electrodes, she went on to complete a PhD with Foord, researching the electrochemical properties and potential applications of the electrodes. He was a supportive supervisor, discussing ideas with Holt, but allowing her to develop them on her own. ’That suited me,’ she says. ’I work best without someone looking over my shoulder.’ Exploring applications such as electrochemical wastewater treatment and trace metal detection taught her to value her chosen field. ’As an undergraduate I found electrochemistry boring. But as the focus of a research career, it’s brilliant,’ Holt enthuses. ’Electrochemistry is everywhere.’

After her PhD, Holt hoped to secure a postdoctoral position in the US. ’I’d been in Oxford for seven years, and wanted a big change,’ she says. After struggling to find a host institution, a last ditch email to eminent electrochemist Allen Bard at the University of Texas at Austin rescued her research career. She received his reply requesting letters of recommendation the very same day, and an hour later got an email asking her when she would like to start. ’I woke up that morning without a job, and six hours later I was planning a move to Texas,’ she says.

The other side of the pond

In Texas, the large international research group met each week to outline what they had accomplished recently. ’You wouldn’t dare be the one who showed up without any results, so sometimes it was a mad scramble to come up with something the evening before a meeting,’ Holt recalls. It was competitive in a friendly way, she says, and provided useful feedback on her work. As a result, she spent two very productive years there. The single most useful lesson she learned from Bard, she says, was confidence to look outside her immediate research area. Consequently, she made her first forays into biological research, investigating the effects of silver ions on the respiration of Escherichia coli.

After her time in Bard’s group, Holt was awarded a two-year Centenary Ramsay Fellowship and returned to the UK. Daren Caruana, an electrochemistry lecturer at University College London, supported her application and offered her laboratory space. In 2006, she was awarded a five-year Advanced Research Fellowship from the EPSRC (Engineering and Physical Sciences Research Council); a lectureship in physical chemistry at University College London followed a year later.

She still collaborates with Foord, using diamond-based electrodes to detect the metabolic products of living cells. ’Now that I have a permanent position, I hope to expand my research interests even more,’ Holt says. ’I love to explore new research areas through collaborations.’ Some of the best projects Holt has worked on have happened by accident - simply by meeting the right person at the right time. ’I hope to do more of the same in future,’ she says.