Profile: Chemistry in a canoe

Jennifer Love explores the reactivity of chemical reactions. Her goal is to develop new transition metal-catalysed reactions beyond what is currently considered feasible.

In 2008, she won the AstraZeneca award in chemistry for her influential work. The award came out of the blue, she says. She received an email saying ’Congratulations!!!’ which she nearly dismissed as spam. ’It was absolutely exhilarating,’ she adds.

Love’s work is borne out of both her experience - her PhD was in organic chemistry, while her postdoc work was in synthetic organometallic chemistry - and her love of reactivity.

This love developed slowly. At school she liked science but didn’t really know what scientists did and was initially interested in law or medicine. But she chose to study science at college, anticipating that she would do biology. After the first year she liked chemistry and by the second year she was hooked. 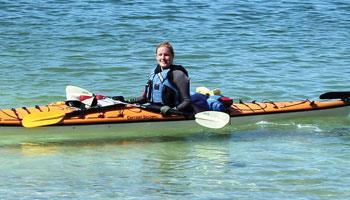 She had the opportunity to do some research work as part of a programme run by the US National Science Foundation: Research experiences for undergraduates. ’That was fantastic,’ she says. It was the catalyst for her to go further with research.

She chose to do a PhD with Paul Wender at Stanford University, US, working on a metal-catalysed reaction making seven-membered rings. Wender had discovered a new way to make them and she was lucky to join early on in the project. ’We were able to make a biologically active natural product,’ she says.

Being able to make a real contribution during her PhD spurred her on. ’The research milestones are important because that motivates you to try the next thing. Research is a game where you don’t get a whole load of successes, so you have to savour the ones that come,’ she says.

The people she has worked with along the way have been important. Her PhD supervisor Wender was particularly instrumental. At the time, only three out of about 85 synthetic organic chemists on her floor were women. Love found that quite challenging. ’I was not particularly confident. My supervisor was extremely supportive. I don’t know that I would have pursued an academic career had it not been for him giving me a confidence boost every now and then,’ she explains.

After her PhD she moved to Caltech, as a National Institute of Health postdoc fellow to work on the reaction mechanisms in olefin metathesis. These reactions are now used by the pharmaceuticals industry but started out as an intellectual curiosity in the 1950s. Love’s postdoc supervisor, Robert Grubbs, shared the 2005 Nobel prize in chemistry for his contribution to their development.

’I love unexpected results - that’s the most fun. It really makes you think very deeply, you have to come
up with ways to rationalise the unexpected,’ says Love. But with the unexpected results come the difficult aspects. ’The ups and downs can be hard to deal with,’ she says. ’You have to find a way to motivate yourself through it. Everyone has to deal with that,’ she explains. ’But early on you don’t necessarily know that.’

Mentoring students is another aspect of her job that Love clearly loves and excels at - she has won two awards for her teaching. Her first PhD student has recently presented his thesis. ’Seeing students develop personally, professionally and intellectually, and especially seeing them get so excited about a result, that is very motivating.’

Love joined the University of British Columbia (UBC), Vancouver, Canada, as an assistant professor in 2003. In July 2009, she became an associate professor. She celebrated by taking a well earned break - a 360km ocean kayaking trip. She and her husband took up kayaking when they moved to Vancouver. ’We knew we’d be working hard but it is really important to make time for life.’

She enjoys kayaking because she is disconnected from work with no phone or computer. But work is never very far from her mind. ’You get so many new ideas while you’re kayaking,’ she admits.

These new ideas are leading Love’s work down an environmental and social justice path. She is becoming more involved in a project at UBC to develop drugs for neglected tropical diseases and is thinking about where to take her work to tackle renewable energy. 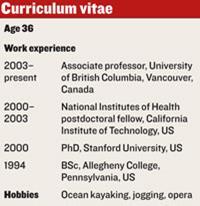 Karen Harries-Rees is a freelance writer based in Melbourne, Australia