Forensic analyst Raychelle Burk explains that real-life forensic scientists have rather more paperwork on TV. Bea Perks is relieved to find they don't carry guns, either

Since the age of 12, Raychelle Burks had dreamed of being a forensic scientist. It sparked her interest in science and, following a degree in chemistry and then a Masters in forensic science, she is now in the enviable position of having her ’dream job’.

’I’ve yet to work the same day twice!’ she enthuses. Her work as a student involved months of the same repetitive experiments, she recalls. But now she has left that all behind. ’Given the variety of evidence encountered, we are often called on to modify or develop, then validate, processing methods,’ she says.

Burks is a forensic analyst for the City of Eugene Police Department in Oregon, US. The unit where she works provides scientific analysis to aid a wide variety of criminal investigations, from homicide, burglary and forgery to sexual assault. While many forensic laboratories contain more specialists than generalists, Burks’s group do both crime scene and laboratory work. 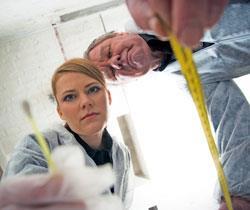 Leave no scrap of paper unturned

’We can be charged with the forensic processing of a variety of crime scenes or pieces of evidence, so we are prepared to collect and/or analyse a variety of items,’ she says. ’While TV shows focus on the high-tech gadgets, "low-tech" techniques like colour or luminescence-based assays see frequent use.’

For example, Burks’s team may be called to process a robbery at a store where a note was used to communicate the robbers’ intentions. The note, taken as evidence, is taken back to the lab, where it can be evaluated to determine suitable fingerprint-processing techniques, and fully documented and recorded. For a handwritten note on plain white paper, says Burks, a standard method is the application of ninhydrin (2,2-dihydroxyindane-1,3-dione), in an HFE-7100 based solution. HFE-7100 is a selective solvent; it is inert to most inks and does not appreciably dissolve the amino acids transferred to the porous substrate in a fingerprint. It has a low surface tension compared with hydrocarbon solvents like petroleum ether, which allows it to more easily and thoroughly carry dissolved ninhydrin to where it is most useful - namely the edges of the fingerprint ridges. After a suitable incubation period, purple ridge details appear. ’This is just one of the chemical processing techniques possible for this note,’ says Burks. 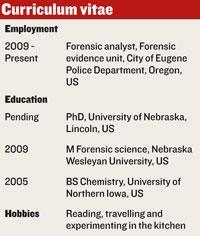 But it’s not just the low-tech techniques that distinguish real life forensic analysis from TV forensic analysis. ’You hardly ever see TV forensic scientists taking extemporaneous and detailed notes, writing reports, and developing court presentations,’ sighs Burks. And there are a few even bigger differences: ’We don’t carry guns, we don’t interrogate or chase suspects and none of us wear such trendy clothes (or uncomfortable shoes) to a crime scene!’

Each case that her team works on could lead to testimony in court. She says that her experience at university - presenting data to fellow students and staff or at conferences, alongside teaching assistantships - prepared her well for this part of the job.

So once you’ve landed your dream job, where do you go next? ’For career development, my immediate focus is my PhD defence - something many grad students can relate with!’ says Burks. Early in graduate school she had the opportunity to work on a joint academic lab/crime lab project. ’I hope to participate in such a project again,’ she says, ’this time from the crime lab side.’