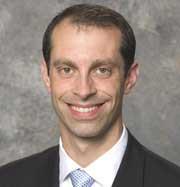 Scientist-turned-entrepreneur Brian Smith has had a slightly unusual route into the biotech world - he returned to university to learn about the business aspects of the industry, studying full-time for an MBA. But he’d started out as a scientist, with a Bachelor of science in engineering (BSE) and PhD in materials science and engineering from the University of Pennsylvania (Penn), US, and was carving out an academic career.

’I initially chose materials science as I was interested in both chemistry and physics, and thought it was a good mix of the two,’ he says. ’As I focused on nanotechnology during graduate school, I saw tremendous opportunity for it to impact medicine, and accepted a postdoc position at the Boston University School of Medicine. I’d done a lot of work with transmission electron microscopy during my PhD, and I wanted to apply it to protein structure, which provided my first foray into the biological field.’

After a year, he returned to Penn for a second postdoc, where his supervisor allowed him a lot of leeway to pursue his own research interests. ’I began to develop a research concept that has, ultimately, become the basis for what I do today - using nanotechnology for targeted radiotherapy of cancer,’ he explains. This led to a move to Philadelphia’s Fox Chase Cancer Center as an independent researcher, with a five-year grant from the US National Cancer Institute, and a traditional career path as an academic lined up.

The realisation that his research could benefit patients made him change paths. ’I didn’t want to build my basic science to a point where it looked clinically useful, and then pass it over to someone else,’ he says. ’I was interested in helping make that transition occur. So I decided I needed to learn about the other side of the equation - business - and went to the Wharton School [Penn’s business school] for an MBA, focusing my studies on the healthcare industry. It’s a complex area - there’s a large number of stakeholders with very different interests, sometimes conflicting. And it gave me the context I needed to bring my research out of the lab and move it towards human clinical trials.’

Forfeiting three years of his research grant to attend business school was a difficult decision, but he’s now sure it was the right one. ’Taking myself out of the comfort zone of the lab changed the way I looked at my career. I went to Wharton as an academic scientist focused on my research career, and while I wanted to turn my research into a company, my eyes were also opened to all the other opportunities there were in business. It was a big risk - my wife and I had two children while I was at business school - and the prospect of coming out as an entrepreneur was scary. But I decided it was important to try and commercialise my research, as that’s what I’m passionate about.’

He teamed up with an MBA classmate, Irene Susantio - a former chemical engineer in the petrochemical industry - and the company, Solixia, was born. The pair are now pressing ahead to raise money to support the company’s preclinical research programme. The idea is to develop better treatment options for cancer, using antibodies to deliver cytotoxic radioisotopes to tumours. ’Others have focused on engineering the antibodies to get better tumour targeting properties, but as a materials scientist I approached the problem from the opposite direction - reengineering the radioactive payload to improve the treatment’s therapeutic index.’ Solixia’s technology is a nanoparticle radiolabel, about one nanometre in diameter, that could improve both the efficacy and safety of targeted radiotherapy.

They’re also facing the challenge of securing funding - not easy in the current economic climate. ’Investors are currently very risk-averse,’ he says, ’but we have injected our own capital, raised small parcels of money, and done deals to obtain lab space and intellectual property. There’s still just the two of us - I do everything from working in the lab to fetching coffee - but it’s all part of the growth experience. The MBA has allowed me to build a business based on my science. In the long term, I can certainly see myself moving into the venture capital community to help others do what we’re trying to do now ourselves.’ 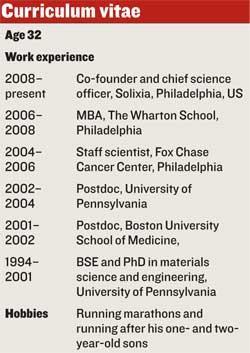