Profile: To ECHA his own

The EU's Reach regulation involves a huge data gathering operation and Kaihsu Tai is working right at its heart. Manisha Lalloo finds out how he got there

The EU’s Reach regulation involves a huge data gathering operation and Kaihsu Tai is working right at its heart. Manisha Lalloo finds out how he got there 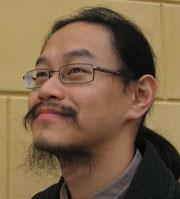 Like many others, Kaihsu Tai found himself studying chemistry at university simply because he was good at it. However, he found his strengths did not lie in the lab. ’I was good at thinking about chemistry,’ says Tai. ’So I only worked with computer simulations of molecules.’ Now, as a junior scientific officer with the European Chemicals Agency (ECHA) in Finland, Tai spends all day thinking about chemistry, but without ever setting foot in a lab.

For Tai, a chemistry degree at California Institute of Technology in the US led onto a PhD at the University of California, San Diego. ’I was thinking of studying protein folding,’ says Tai, ’but my advisor suggested some other topics. One of them was the interactions between proteins, rather than just how one protein folds’. In the end, Tai found himself carrying out computational research into acetylcholinesterase, an enzyme in the nervous system that is found at the junction between nerve and muscle cells.

Towards the end of his studies, Tai attended a conference in Switzerland followed by a fortuitous stopover in Oxford, UK. ’It turned out that I found a job in Oxford and it was difficult to turn it down!’ he says. Tai spent the next six years at the university, working on two different projects. ’I continued to do simulations of proteins ... looking at protein channels in the heart.’ However, his work in computational chemistry also saw him designing databases to manage the data produced by the simulations.

In 2009, Tai’s funding came to an end and he found himself looking for his next position. He soon found himself in his current role at the ECHA. In June 2007, the ECHA was set up to oversee the new Reach (registration, evaluation, authorisation and restriction of chemical substances) regulation in Europe. This mix of chemistry and policy has made the ECHA an ideal home for Tai. ’I have always been interested in policy, and the environment in particular, and also a little bit in law and how law shapes our society,’ he says. 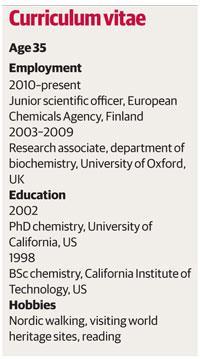 At the ECHA, Tai’s team checks the chemical properties, toxicology and ecotoxicology (how a substance interacts with the environment) of registered substances. ’It’s thinking about chemistry at the very basic level and then thinking about biology - toxicology in particular - and about policy issues,’ says Tai. ’We have to interact with the authorities or agencies in each of the member states, to see whether everybody’s satisfied that the information provided is correct, that it makes scientific sense and that the substance is actually used safely.’ For each substance, this process can take several months.

Tai finds that his past experiences have given him valuable lessons for today. ’Having experience in information technology helps a lot in getting used to the information management systems here. This legislation is not seen anywhere else in the world - nobody else has tried to collect so much information about chemicals that we use every day.’ And while Tai is not involved in the actual design of the databases he uses, he does offer advice from a scientific point of view.

One of the highlights of the job, says Tai, is its variety and that surprises are almost inevitable. ’We’re dealing with stakeholders who operate in real life,’ says Tai. ’The EU is half a billion citizens and [the organisations we work with] deal with their business needs. They interact with us, and we have to respond, so it’s difficult to predict what you will be doing in the day.’

And how does he find the transition from California to Helsinki? ’It’s colder than your freezer outside at the moment!’ says Tai. ’I would not have imagined that I would be living here when I was doing my PhD in sunny San Diego, but I love it,’ he adds with a laugh.

Manisha Lalloo is a science writer based in London, UK