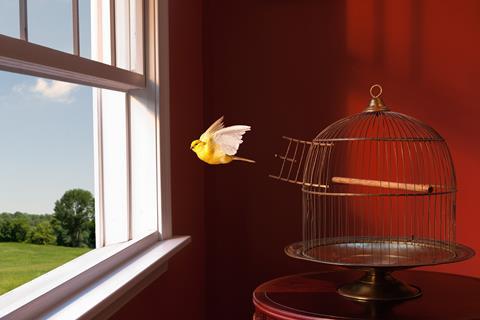 Neil Carragher was in his mid-40s when he changed from working as principal scientist at AstraZeneca to a temporary contract as a group leader at the University of Edinburgh, UK. At the time, he had a secure, well-paid position with a lot of responsibility and, at such a high level, quite some autonomy in making decisions. Sounds perfect, so why would he want to throw that away in exchange for all the uncertainty he faced when starting an academic group on a temporary contract?

‘Wow, that sounds courageous, but also very risky,’ I asked him. ‘What would you have done as a 50-year old if you wouldn’t have made the highly competitive cut to secure a professorship? Didn’t you feel scared?’

That simple yet powerful statement was a game-changer for me. When considering career options, we often think in terms of security, as expressed by the length of a work contract and the stability of our future employer. This wish is understandable, especially for researchers who often move between temporary contracts well into their 30s. However, exclusively looking at security can limit our view on career options.

‘How’s life? How is your job?’ I asked an old friend of mine, speaking with him for the first time in a couple of months. We worked on the same floor during our PhDs and have managed to keep in touch since then. ‘My boss is an idiot, work is boring’ he replied. His answer to this question is not that unusual among people who are frustrated by their job. We spend considerable amounts of time at work, routine can turn into boredom, and it doesn’t take many toxic characters to make our lives miserable. Still, I am baffled. The last three times I asked him about work, the answer was always the same, even his poetic wording. After a very successful PhD, he chose stability over everything else. He joined a medium-sized, family-run company, a market leader in its niche. This is as safe as any job will ever get within the private sector. However, the owners of the company are overbearing characters who try to control everything within the company. My friend will never get fired, but what will happen if his mild frustration develops into a burn-out or a bore-out in the next few years? He’d be 20 years into the same static job, through which he drags himself. Hearing him speak, I assume that his learning curve is relatively flat, making him less and less employable outside of his current environment.

Let’s contrast Carragher’s ‘employability mindset’ with the ‘security mindset’ of my study mate. The employability mindset is much more flexible. With it, we move beyond merely looking at the length of a contract. Instead, we try to answer the question ‘Will I learn relevant skills?’, which is equivalent to ‘How will this role affect my employability?’ We won’t exclude ‘risky’ career options just because they don’t come with a permanent contract. Instead, the red flag we’re aware of is a flat learning curve. We are less likely to become trapped in a safe but boring position.

What about us as partners and parents? Can we still afford to relegate security concerns to second rank when we start a family? In this life phase, we have to decide how we distribute family and work-related responsibilities. Needless to say, this is a highly personal decision. Depending on your employers and the tax system of your country, you might get nudged into assigning the roles of main breadwinner and main caregiver. What will happen to both partners’ employability and their skills in such a scenario? In the short run, such a specialisation is often the simpler and financially more profitable route, but this comes with a loss of flexibility. What will happen if the main breadwinner gets sick for a prolonged time? Will the family get into financial trouble? Distributing the roles more evenly allows for more resilience. Both partners retain a decent level of employability, giving the family more leeway to adjust to new situations and absorb shocks.

The employability mindset gives you resilience and adaptability, like a tree bending in the wind. At times branches will break, but new ones grow in their place. The security mindset provides you with stability, like a concrete wall. Such a wall can withstand many storms, but if it faces one that’s too strong, the damage is irreversible.