Russell Keast’s early years as a chef gave him an appetite for science that took him out of the kitchen and into the lab, he tells James Mitchell Crow

Russell Keast’s career path has taken a few sharp turns. The New Zealander admits that chemistry and biology didn’t hold much appeal for him at school. But after a successful first career as a chef, ultimately running his own restaurant, Keast’s hunger for a better understanding of food science saw him swap his apron for a lab coat and head back to university. That switch has ultimately led him to his current position as a sensory scientist at Deakin University in Melbourne, Australia, where his research includes studies into the relationship between fat, taste perception and obesity. 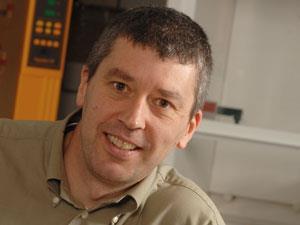 Growing up, Keast’s early mentors were not scientists, but chefs, including a family friend who was happy to have Keast help out in his commercial kitchen. After finishing school, Keast joined the New Zealand Air Force as a trainee cook, where he completed his chef qualifications, and eventually Keast and his family invested in a restaurant in the country’s capital, Wellington. But after four years, and several awards, Keast decided to sell up. ‘I was still quite young, and I wanted to know a bit more – I wanted more knowledge of the science of food.’

That desire brought Keast to a food science degree at Otago University, but a career in research was still far from his mind. ‘I went back to Uni not

really knowing where I’d end up – I had visions of becoming a writer,’ he says. Following a challenging first year getting up to speed with the basics, things began to fall into place, and after graduating he stayed on for an honours year research project on the carbohydrate content of garlic, and then a PhD on beer flavour.

At the time, Keast’s PhD supervisor, Jean-Pierre Dufour, had just arrived from Belgium. ‘He had a brilliant collection of brewers’ yeasts,’ Keast recalls. The team were looking for yeasts to speed up lager production, without affecting the flavour profile. ‘We’d brew up a batch and assess the flavour,’ he recalls. It might sound like a dream job, but the flavour assessment was the job of the gas chromatograph, not the scientists, he adds. Although this project failed to identify speedy yeasts that would give the right flavour profile, it did springboard Keast on to a postdoctoral position at the Monell Chemical Senses Center in Philadelphia, US.

‘It’s one of the best environments to be in for taste, smell and chemical senses research,’ Keast says. ‘They are very smart at what they do.’ Keast’s work at Monell centred on bitter taste flavours, including identifying the component of virgin olive oil that gives the oil its characteristic burning kick at the back of the throat. This localised irritant effect is very unusual – the only other compound known to have the same effect is ibuprofen, a non-steroidal anti-inflammatory drug. The compound that Keast identified, oleocanthal, turned out to be a natural anti-inflammatory – and probably an important part of the health benefits of the Mediterranean diet. ‘[Oleocanthal] is very difficult to isolate, but the work now coming out is backing up everything that we first hypothesised about the benefits of the compound back in 2005,’ he says.

After five years at Monell, Keast decided to move closer to home and took up a research position at Deakin. Much of his research now focuses on taste perception and preferences, particularly of fat in foods, and on how differences between individuals can influence their body weight.

The work is underpinned by the emerging theory that the five basic tastes – sweet, sour, salt, bitter and umami – should be joined by a sixth. ‘I was always intrigued that we had taste receptors for two macronutrients – carbohydrate [sweet] and protein [umami] – but not for the third, which is fat,’ he says. Although not yet proven beyond doubt, the evidence is growing that humans can also taste fat, in the form of the breakdown product that always accompanies it: fatty acids.

To help test this theory, Keast and his team have developed ‘custards’, identical in appearance, texture and smell, but differing slightly in fatty acid content. Tasters can tell the difference, and with an intriguing caveat – obese and overweight tasters are less sensitive to the difference.  ‘Our findings suggest there is a taste associated with fat, and that its functional role is in guiding the consumption of fatty foods,’ Keast says. The team is now running long term trials to assess whether a temporary, very low fat diet can ‘reset’ an individual’s preference for fatty foods, potentially helping people to lower their fat intake. Given obesity’s emergence as the world’s biggest preventable health disorder, the outcome of the trial has global significance.

Keast is certain that his time as a chef helps in his current research career. ‘It’s good to have a broad knowledge of food, both practical and academic,’ he says. But science also finds its way into his kitchen: ‘I apply the scientific principles of making good dough when I fire up the pizza oven; it does make a difference knowing how you want the final structure to be and how to consistently achieve it.’