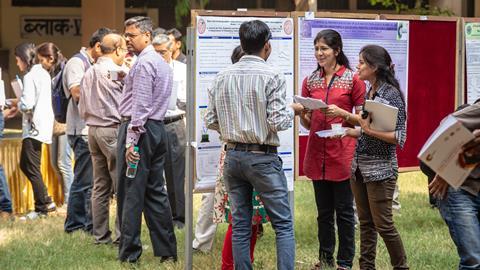 The art of crafting conferences

The benefits and challenges of three approaches to scientific meetings

Conferences are a central feature of scientific life. For many, such meetings are a chance to hear about exciting new research, meet international colleagues and make a mark on the chemistry community. But for some others, the traditional conference model is no longer fit for purpose and it’s time to try something new. So what are the options when it comes to creating a conference? And what are the benefits – and challenges – with each type?

Regardless of format, all conferences want to achieve the same thing. ‘The most important thing is, of course, the high scientific quality of the contributions to a conference. That’s what attracts people,’ says Christina Moberg, professor in organic chemistry at the Royal Institute of Technology (KTH) in Stockholm, Sweden. Conferences also need ‘to have an environment where you are able to meet people and discuss,’ she adds.

Moberg is convening a session at the seventh European Association for Chemical and Molecular Sciences (EuCheMS) congress, held in Liverpool, UK in August 2018. This biennial event, which is organised by the Royal Society of Chemistry (RSC) in full consultation with other EuCheMS member organisations, is expected to see 2000 European chemists come together. ‘We consult with the whole EuCheMS community on, for example, who the scientific committee members are going to be, who the conveners are going to be,[and] who the plenary and keynote speakers are going to be,’ says Sarah Thomas, RSC senior programme manager for international engagement. The five day meeting will feature scientific talks, plus oral and poster communications, keynote speakers, round table discussions, an exhibition and plenty of networking opportunities.

Conferences are important for career progression. To this end, EucheMS will have dedicated sessions organised by the European Young Chemists’ Network (EYCN). These will ‘offer a completely different and more interactive programme,’ says EYCN Board member Fernando Gomollón Bel. ‘We have specific session for training on soft skills that are not often included in traditional academic conferences, like for example writing papers, applying for grants and also we have specific sessions on working in industry.’

EYCN has also organised a series of lectures by young researchers who already run their own research groups. ‘The idea is to have a session where they can speak about their science, but also explain to young chemist how they became so successful in such a short period of time,’ says Gomollón Bel. Gender parity is also something EYCN considered important and is near 50:50 in their programme.

Gender diversity is one of the most pressing issues for conference organisers and participants. In April 2018, Cambridge earth scientist Heather Ford published a study analysing the gender, career stage and type of presentation delivered by participants at the American Geophysical Union (AGU) fall meeting from 2014 to 2016. She found that women scientists are offered fewer opportunities to present their research than men.1 Some of this discrepancy was down to the smaller proportion of women in senior positions, but she also found male conveners were more likely to provide speaking opportunities to other men, potentially limiting women’s career prospects.

A similar situation in chemistry recently prompted Sophie Sacquin-Mora, director of the French Theoretical Chemistry Network (RFCT) to announce the organisation will no longer fund conferences with no invited female speakers (Chemistry World, July 2018, p5). So far, Sacquin-Mora says, ‘all the feedback from the French community [has been] very supportive. But we have to wait for the next call for proposals to see if it makes any difference. Asking for at least [one] female name on the speakers list isn’t really much, and the goal of the announcement is more to force people to think about gender issues when setting up a scientific programme.’

Gomollón Bel agrees that ensuring diversity should be a priority at any meeting. ‘I think trying to encourage debate and more diversity of voices, whether it’s in a question or on a panel [discussion], that’s the most important thing,’ he says. ‘And encouraging open debate between the speakers and the audience.’

Ford has also suggested that diversity training for those organising conferences may be helpful. The hope is that thinking about diversity will lead to more varied conference programmes and stop invites constantly going to the same voices that have been heard before.

Most agree that scientific meetings should be where researchers discuss and exchange ideas with others – and making sure discussions flow is also something conference planners focus on. Moberg recognises that hosting a panel discussion can be one of the most difficult jobs at a conference – and a good chair is hard to find. ‘[Session chairs] are, of course, responsible for making sure everything works smoothly,’ she says. ‘It’s good if the chair has some questions in order to stimulate a discussion if there is time for it.’

But what about outside of sessions? ‘The problem with all of these conferences, in my opinion, is it’s quite impossible to talk to everyone, to see everything that is happening,’ argues Gomollón Bel. ‘At the end, you limit yourself to going to what you already know, what you have already seen, so you don’t really experience all the diversity and all the ideas that could be around.’ He suggests conferences should devote more time to encouraging different research areas to interact, even within chemistry itself.

One conference format that does this already is the RSC’s Faraday discussions. Eight of these meetings are now held a year, generally covering topics focused on physical chemistry and its interfaces. Around 20–25 speakers produce papers for each event, and proofs are circulated to participants well in advance of the meeting. The actual meeting is then able to concentrate on discussion and debate, with the final papers and summarised discussions published in the Faraday Discussions journal. ‘Anyone who has been to one is universally enthusiastic,’ says Heather Montgomery, deputy editor of Faraday Discussions. ‘[Presenters] have just five minutes to present the key points at the meeting, and then another 25 minutes per paper for discussion. That’s an opportunity to go in-depth and question the paper and its wider relationship to other papers and the field more generally.’

While smaller than most conferences, the Faraday meetings allow people to interact, with even the most eminent speakers getting involved rather than swooping in for their talk and then leaving – a common occurrence at other meetings. ‘We also bring together people who might not ordinarily go to the same conferences and it’s an opportunity to think a bit more laterally about a field and move research forward in a more productive way,’ Montgomery adds.

Obviously these meetings require a lot more effort on the part of both participants and organisers. ‘It does rely to a certain extent on people having read the papers beforehand, which is a commitment,’ Montgomery says. ‘And sometimes we struggle a little to get students to participate, but I don’t think that’s unique to Faraday discussions!’

But do most conferences represent the best mechanism for swapping ideas and developing research communities? ‘If one was to try and design activities to fulfil this mission effectively and efficiently, I expect that having lots of lectures and relatively short 20 minute coffee breaks is probably not a particularly effective way of using the opportunity of having all these people together,’ says Aiden Budd, an expert in community building in bioinformatics at the Earlham Institute in Norwich, UK. In roles at several research institutes including the European Molecular Biology Laboratory (EMBL) in Heidelberg, Budd had been tasked with bringing researchers together and eventually stumbled upon an alternative meeting format. ‘A friend of ours at the time had just been to something called an “unconference” in the US,’ says Budd. ‘We thought, OK, let’s look into this unconference format, maybe there is something interesting there to try.’

An unconference aims to shift the focus of meetings from speakers to participants. Rather than having an organised programme of talks, the meeting will start with people organising themselves around topics of shared interest. Individuals pitch ideas for sessions and then people decide what they would like to talk about and groups split into individual discussions.

‘In particular, our interest was in flipping the amount of time spent at the event focused on a person telling you stuff, compared with people guiding and making their own conversations that somehow are most useful for them or most interesting for them,’ explains Budd. The idea is to empower participants to get the most out of the event as well as breaking down some of the academic hierarchies that traditional conferences can perpetuate.

Sine 2012 Budd and his colleagues have run over 30 unconferences for a variety of organisations, setting up their own charity to do it. Group sizes have gone up to 100 participants. They don’t always stick to a pure unconference format, although they generally forgo long talks for more parallel discussion sessions. ‘I am a strong believer in the value of such kinds of events for the scientific community, given that I am someone who does not pick up much, if any, useful information when I listen to talks,’ says Budd. ‘For me, the value all comes from meeting people at the event and getting to know them better and driving the conversation with them towards subjects of specific mutual interest and things we might like to try together.’

This type of meeting format can be risky, though, as it relies on full participant engagement – they don’t work if people are sitting at the back, checking their email and only half listening. ‘It’s about giving a joint sense of responsibility to everyone involved, [to decide] how to be useful and engaged,’ says Budd. ‘And I think it takes a bit of getting used to, this giving up of power. It can be quite disconcerting when you are used to being in control of all the logistics.’

But there are still question marks over how widely such formats can be used – for example, could such an event accommodate the needs of the many students and early career researchers that will attend EUCheMS congress? Budd’s perception is that increasingly organisations are experimenting with a variety of unconference formats, both in the academic and business worlds.

Perhaps some experimenting outside the laboratory and in the conference hall may prove useful for chemistry too.