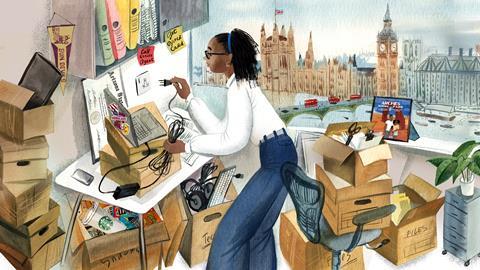 ‘It all started with Brexit. A year before that, we’d bought a house and I got my fellowship. Then, that morning, we saw it on the news. It changed my feelings about the UK, particularly with what came after.’ In 2014, Christof Jäger had moved from the Cluster of Excellence Engineering Advanced Materials in Erlangen, Germany to the University of Nottingham, UK, to start a new life with his family. Now, he’s leaving for Gothenburg, Sweden. ‘The prime minister [Theresa May] was saying that if you believe you’re a citizen of the world, you’re a citizen of nowhere. It gave us a bad feeling.’

Jäger’s story is one familiar to thousands of chemists around the world. When it comes to jobs, we usually talk about changing location for career promotion, higher salaries or a better quality of life. Outside of that, leaving a country is often thought of through the lens of major incidents, such as the academics fleeing Ukraine since the Russian invasion. Yet for many chemists, particularly those with the privilege of coming from western countries and with the funds to move, their motivation to relocate is more personal: it comes down to ethics, politics and how their family is affected.

These decisions have been heightened in recent times due to a shift in politics toward the right, as seen for Brexit in the UK, or the Republican Party in the US. Perhaps the most high-profile case of a chemist moving in response is that of Alan Aspuru-Guzik, a theoretical chemist who left Harvard University, US, for the University of Toronto, Canada after the election of Donald Trump. In an interview with Nature, Aspuru-Guzik described his departure as ‘bittersweet’, but inevitable given the polarisation of politics. ‘Why not use my skills in a country where I don’t have to worry about the next national drama,’ he argued, ‘and I can concentrate on my science and be with people who share my values?’

This doesn’t always equate to leaving a country. In the US, where different states can have wildly different laws on permitted research based on who’s in control of state legislature, flow of scientists happens regularly; for example, South Dakota outlaws all research related to stem cells, while California supports this research with millions of dollars in grants. But the decision-making process is often less about what’s allowed, and simply the experience of living in a so-called ‘red state’ run by a Republican senate (no one interviewed mentioned moving out of a more liberal, or ‘blue’ area).

One chemist working for Eli Lilly, who asked to remain anonymous, relocated from the southern plains region of the US to the Midwest based on this absence of shared values with his neighbours – from their lack of support for reproductive rights and LGBTQ inclusivity, through to climate change denial. Now, though, he’s ready to move again. ‘The country seems to be getting more polarised,’ he says. ‘Maybe it’s just people shouting, but it feels like there’s something in the air. Everywhere you go, there’s divisions between people. It makes me feel like we’re right on the verge of another civil war. Given the political climate, it seems the country has taken a turn that I can’t ethically follow … they’re calling their enemies “vermin”, things like that. And I’m at a loss at even thinking about where I would go. I was going to apply for passports for me and my family, but we can’t really afford them now. But I’ve been looking at places that might accept us.’

The difficulties for setting up international collaborations matter

Some countries have been quick to capitalise on this politically-driven brain drain. When the US pulled out of the Paris climate agreement, French premier Emmanuel Macron launched a ‘Make Our Planet Great Again’ campaign for climate researchers to relocate to the country. There were more than 255 applications, and ultimately 18 leading climate scientists were awarded millions of Euros in French funding; 13 of the scientists had moved from the US. The UK faces a similar crisis. In 2019, science and engineering trade union Prospect found two-thirds of its EU members were thinking of leaving the UK, while in early 2022 Martin Smith, head of policy at the Wellcome Trust, warned of a ‘real prospect that bright young scientists will decide it will be best for their careers if they leave the UK’ following the country’s departure from the European Union. According to the Organisation for Economic Co-operation and Development (OECD), the UK had a net loss of around 1300 scientists in 2020, a level of brain drain comparable to Brazil, with only India seeing a larger outflow. Before Brexit, it had been a net importer of academics.

The exoduses show no sign of abating. In June 2022, when the US Supreme Court overturned the landmark Roe v Wade decision that established the constitutional right to abortion, Canadian chemist Cathleen Crudden, based at Queen’s University, in Kingston, Ontario, offered on Twitter to support any US chemist eager to move. It was an offer that was taken up almost immediately. ‘I had another person contact me just two days ago!’ Crudden says, speaking in mid-July. ‘I’ve had multiple people say over the last year, very seriously, and very persistently [they want to move to Canada]. And I don’t blame them. I mean, I would! We are hiring right now in a lot of Canadian schools. There’s a programme we have called the Canada Excellence Research Chairs. It’s a fair amount of money for senior-level hires, and it’s targeted to bringing new talent to Canada.’

There’s no question these financial considerations tie together with ethical moves. ‘It’s definitely both,’ says Jäger. ‘Culture was the initiator, but how the funding landscape develops and, in particular, the difficulties for setting up international collaborations matter. I just met a colleague who moved out of the UK after Brexit, and he said that setting up collaborations was difficult because of the [political uncertainty] in the UK. Now, the UK doesn’t have a science minister currently, and who knows what our future funding bodies will look like! So this also played a role in the decision.’

Yet simply saying choices are about ethics and politics isn’t enough to explain the decision-making process for the majority of scientists looking to start anew somewhere else. While ethics may be the sole concern for single scientists, those with families usually make the decision based on what’s in the best interest of their children – often at a cost of a comparably higher wage.

One senior chemist for AstraZeneca, who asked to remain anonymous, decided to leave the US back in the early 1990s. ‘We had a chance to stay,’ he explains, ‘but decided we did not want to raise our kids in such a violent country. Not just the gun laws, but also that all movies glorified violence.’

Canadian Rae Lawrence recalls making a similar decision on where to go after finishing her studies at the University of Missouri, US. ‘I got my PhD in December 2000, right after George Bush was elected. I looked at the platform, and immediately thought it was time to go back to Canada!’ Almost two decades later, when looking at her next career move and with positions not available in her home country, the politics of America once again affected her decision making. ‘I looked at America, and it was just during the Trump years. I felt politically disenfranchised … back when I was living in Missouri the Columbine shooting happened, and as children weren’t on my radar I never thought too much about it. But there have been so many school shootings over the years. Now I have two daughters, and our move would be around the time they’d start school. And I did not have the emotional strength to be able to drop them off at school and worry all day that I’d never see them again.’ Ultimately, Lawrence decided to work in the UK. ‘But if it had just been me, I’d probably be in Southern California, lapping up the sun and living like a rockstar, because the salaries are so much higher!’

‘You make decisions as a family,’ Jäger agrees. ‘I grew up in Germany, so it would have been easier to go back to Germany [on leaving the UK]. But it was clear that Sweden would be good for the kids. We sat down and said: “Is this a place where we want our kids to grow up?”’ Conversely, Jäger was discouraged from moving to some countries in the Middle East due to their human rights record. ‘I’ve had colleagues go there,’ he says. ‘As someone with a family, with the role of women there, I wouldn’t feel comfortable.’

And Crudden says that this consideration – about family life – is really what’s driving US colleagues to move to Canada. ‘The whole foundation of the US is that you can, regardless of whoever you are, succeed. You don’t have to be the son of a Lord or something. But it’s moved away from that in the US with wealth inequality. Now, the American Dream can be had in Canada.’

While she realises the motivations and supports their choices, Crudden is still sad that things have got to the point where scientists are leaving the US. ‘The US is an awesome country that has done phenomenal things,’ she says. ‘And, frankly, as its [Canadian] little sister, I do hope they right the ship. The US has produced incredible science and engineering, and it would be a huge shame to see that decreased or eroded.’

It’s a sentiment that, once again, shows the concept of science being apolitical is a lie. Ultimately, talented chemists who are able to leave difficult situations will do so; and, in a climate with polarised political opinions and uncertainty, it’s unlikely the migration of the disenfranchised is set to end soon.