Following the Covid-19 pandemic, is it time to rethink events for good? 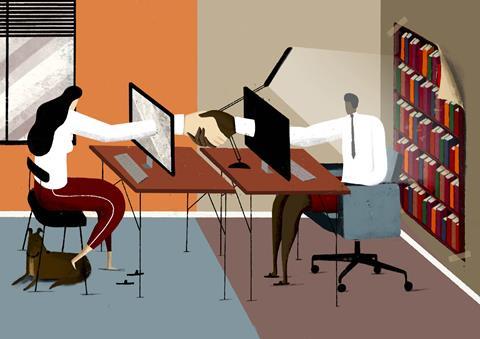 Is this how we’ll meet at conferences in the future?

For the past 10 years, there have been increasing calls – in papers, comment pieces and throughout academia – to rethink how conferences are structured. The arguments are familiar, whether it’s the lack of childcare arrangements discriminating against women, concerns around travel or the rising costs impacting students.

Yet few could imagine the Covid-19 pandemic, and its immediate impact; overnight, conferences were cancelled or moved online as scientists were required to stay at home. Now, as the world begins to move out of the shadow of the pandemic, it’s a golden opportunity to reflect on scientific conferences. Are they still fit for purpose – or has the pandemic shown we can do them in a better way?

The trouble with conferences

Prior to the pandemic, one of the main arguments against in-person conferences was their ecological impact. In 2019, Timothy Saunders, then an assistant professor at the National University of Singapore and now an associate professor at the University of Warwick, UK, argued in Nature that more needed to be done. He says estimates suggest that a person attending a single conference produces 800kg of CO2 emissions. ‘Among young people, awareness is much stronger,’ Saunders says. ‘But we need to reduce impact caused by more senior people, too. And it’s hard to change attitudes.’

Saunders is not alone. In 2015, the Tyndall Centre for Climate Change Research highlighted academics as those with some of the worst carbon footprints in the world, suggesting that UK academics could be making on average 4.7 conference trips a year; by comparison, the average UK employee takes an estimated 0.5 flights per year for business reasons. And in 2020, a paper in Nature found the carbon footprint for the 28,000 attendees of the fall meeting of the American Geophysical Union was roughly equivalent to the weekly carbon emissions of the entire city of Edinburgh, UK.

The nature of conferences can also price out chemists unable to secure sponsorship to travel – particularly those at early stages of their career or from countries outside Europe and North America. It’s a problem Isaiah Speight, a postdoctoral researcher at the University of California, Irvine, US, is all too familiar with. As the western regional chair for the National Organization for the Professional Advancement of Black Chemists and Chemical Engineers (NOBCChE), he’s seen the reality of how conferences affect students both as attendee and organiser.

‘It sucks it took a pandemic to put this on people’s radar,’ Speight says. ‘Think about the money that goes into going to a conference. There’s travel, hotel costs, registration costs, meals, those six coffees while you’re networking. And not all of that can be easily reimbursed, especially for students.’ While there are often attendance grants, Speight points out that it’s often a 50% chance at best they will be approved; if they aren’t, the student will have missed the early bird discount. ‘There’s no cushion – your pockets are going to take a hit.’

The other problem with this inherent privilege for established researchers is that it reinforces biases, Saunders adds. ‘You have gatekeepers, organisers, who choose who speaks,’ he says. ‘That can be limiting.’ When someone has a reputation for speaking at conferences, they get asked to do it again. This results in the classic problem of the majority of speakers and panellists being older white men. Since the pandemic caused conferences to move to the virtual space, Saunders says, he’s noticed the make-up of attendees – and presenters – change drastically. ‘One thing we’ve shown is that to hear talks about science, you don’t have to be in the same room,’ he says. ‘I think that makes science more accessible, particularly outside of western Europe and the United States. I’ve had a lot of colleagues from South America and Asia who have been saying they can finally attend!’

Yet more eco-awareness, and greater ways to improve access – such as childcare arrangements or better support for students – could still make large-scale events viable. And there are key arguments in their favour. Conferences are big business in science, with virtually all large organisations hosting a range of events throughout the year to serve their community and generate income. In 2019, the spring and fall conferences of the ACS were attended by more than 28,000 chemists, with costs of $590 (£440) for full members. This puts revenues for the events at millions of dollars, even before factoring in exhibitor space and sponsorship; for smaller organisations, the money made via conferences can help fund grants or support members in need.

For academics, conferences are also essential for meeting other people and making connections. For example, Emmanuelle Charpentier and Jennifer Doudna’s chance meeting at a conference in Puerto Rico led to a Nobel prize winning collaboration around Crispr gene editing. ‘A lot of people go to conferences for networking, and a lot of collaborations are borne out of just bumping into somebody and having a beer,’ says Speight. ‘Cold emailing someone isn’t the same – it takes the humanity out of it. At a conference, you see someone, you get that light in their eyes, the excitement, the joy. I think the pandemic showed many people don’t know how to network – they can’t make a connection without relying on a face, a handshake and an elevator pitch.’

And location can be just as important as that face-to-face contact. For many scientists, in-person conferences act as a holiday away from the lab – a chance to catch up with colleagues while enjoying a change of scenery. Virtual conferences, meanwhile, result in screen fatigue and general exhaustion. ‘It’s an important point, that conferences can help you be productive,’ Saunders concedes. ‘If you’re in a place where you’re relaxed and happy, you are more likely to do good work and have good discussions.’

It seems, then, that in-person conferences aren’t likely to go away. Fortunately, there’s a middle ground that seems to be attracting support from both sides of the debate.

The best of both worlds

Even before the Covid-19 pandemic began, chemical societies have been scrambling to find ways to hold a main conference and yet support those unable to attend in person. These hybrid conferences look set to become the new normal, with most chemical societies already embracing the format and offering virtual attendees a hefty discount. The aim is to deliver a conference experience that works for everyone.

Several concepts have already been trialled. In November 2019, the European Biological Rhythms Society held its conference live and virtually, with the aid of five major ‘hubs’ to cut down on travel distances. More people chose to attend virtually than in person. Other conferences record all talks, so they can be viewed later to help break up exhaustion, and hold Zoom breakouts to continue discussions. Others are looking at how to take traditionally in-person events, such as poster competitions, into the digital world to ensure attendees get the complete experience. The good news is that there are already clear signs it can be done, such as the Royal Society of Chemistry’s Twitter Poster Conference, which is held exclusively on social media over a 24-hour period. When it first launched in 2015, it attracted 80 posters from around the world; in 2021, it attracted almost 900 posters from 61 countries, spread over 13 different areas of chemistry.

The idea of moving posters digitally is something that’s already being looked at to ensure no attendees miss out on an in-person conference’s benefits, Speight says. ‘Posters are awkward! If nobody comes to your poster, you’re kind of just standing there. You want to go and see other posters, but there’s always a fear of missing out: you walk away and then a Nobel prize winner walks by, loves it, and you’re not there! That restricts you, so you only get to really see the conference in the five-to-10 minute window when the posters are being torn down. By moving it into a byte-sized space makes it accessible and efficient.’

NOBCChE is also embracing its own version of the hybrid model, Speight explains – one aimed to fight the dreaded Zoom fatigue. ‘Instead of cramming everything into a conference that’s a couple of days, and forces people to get burned out or into multiple Zoom sessions at once, we decided to do pre-conference events to set the stage.’ Rather than spreading the conference just by distance, NOBCChE’s approach means that the conference is spread out over time, giving attendees the opportunity to see everything. ‘After three weeks to a month, we have a series of follow-up events [to the main conference] over the course of four days,’ Speight continues. ‘Some of them would be geared toward early career professionals, some graduate students. That means people can plan ahead for what’s coming up.’ The NOBCChE breakout groups are exclusively virtual, and organised by different conference committees. This means they also tackle the problem of a single committee deciding on speakers, giving a chance for rising stars and those who may otherwise be marginalised to be heard and ensuring topics important to local members are addressed.

The hybrid model is not without risks. In particular, the pre-existing biases toward those who can attend conferences will only be reinforced, and they could run the risk of further exacerbating a two-tier system of those who can attend in person and those relegated to the virtual world. For Speight, however, the risks are manageable as long as organisers remain aware of them – and the benefits of rethinking conferences vastly outweigh any drawbacks. ‘I think that people need to recognise that times are evolving and changing,’ he says. ‘I think that once people start to recognise that things like social media have a space in science, we can help build the next generation of scientists.’

The transformation of in-person science and engineering conferences to virtual events due to the ongoing Covid-19 pandemic has not just reduced their associated carbon footprints, it also significantly improved diversity and inclusion at such meetings, according to a new study.

Researchers compared historical attendance data from the North American Membrane Society (NAMS) annual conference, the International Conference on Learning Representations (ICLR) and the American Astronomical Society (AAS) conferences, all held in-person in the US, with the same meetings after they switched to a virtual format in 2020. They also examined events specifically designed for the online environment, measuring  things like cost, carbon emissions and attendee demographics.

The carbon footprint of 7000 virtual attendees was estimated to be equal to one in-person attendee of an international conference in 2019. Attendance by students and postdoctoral researchers increased by as much as 344% when the events became remote, female participation increased as much as 253%, and attendance jumped by as much as 700% for ‘gender queer’ scientists.

The high costs associated with in-person scientific conferences can be prohibitive for sociodemographic groups that may have a more difficult time obtaining funding for travel, like students and postdoctoral scientists. For African researchers the cost of attending recent ICLR, AAS and NAMS in-person events was on average between 80% and 250% of their country’s annual per person gross domestic product (GDP), compared with about 3% of per capita GDP for US participants. Historically, the price tag of attending NAMS in-person meetings was on average more than $1,600 (£1,200) for students and $2,100 for postdoctoral researchers, while the virtual cost for that same meeting in 2020 was just $72.

‘These findings support the ability of a virtual conference to reach into the scientific community,’ said the study’s co-senior author Andrea Armani. ‘If we truly want to improve inclusion and diversity in science and engineering, we need to learn from the past year and continue to develop alternative virtual networking methods,’ she stated. Rebecca Trager