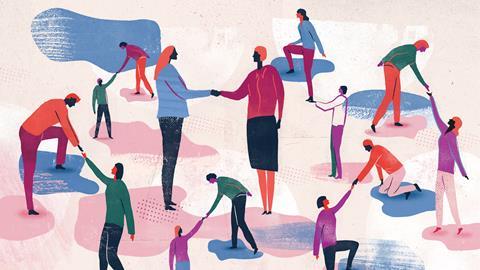 ‘When people decide to drop out of the academic chemistry career track, they often do so because they’ve encountered some kind of roadblock and they can no longer see themselves thriving in that environment,’ says chemist Brandi Cossairt from the University of Washington, US. One solution she saw was to set up the US-based Chemistry Women Mentorship Network (ChemWMN). ‘There’s a lot of other roles that mentors can play, but I feel that one of the critical ones to maintain women in [chemistry] careers is to intervene in those moments and say “Let’s talk about this”.’

The statistics for women in academic chemistry are still bleak – in the UK, data from 2018 showed that while 44% of undergraduate chemistry students are female, only 9% of chemistry professors are women. The issues leading to this attrition have led female chemists like Cossairt to come together to share their own experiences with junior colleagues and students.

The SCS Swiss Women In Chemistry network, launched in 2019 under the umbrella of the Swiss Chemical Society, came out of concerns that women were under-represented within the society. Rachel Hevey, a chemist at the University of Basel, set up the network with several other professors. One of the first things requested was a mentoring programme. ‘We’re now just starting the fourth year of the programme and I think we have 35–40 mentor–mentee pairs – it’s been growing every year,’ says Hevey.

The scheme pairs women from master’s student to postdoc level with more senior mentors, mainly from industry, for one-on-one monthly meetings. ‘A lot of [students] want to know what types of industry positions are available,’ says Hevey. They also organise biannual regional dinners for the whole network, often sponsored by the large Swiss pharma industry, which Hervey says has been supportive of the network.

Cossairt and her co-founders launched the more academia-focused ChemWMN in 2013. ‘We just started emailing all the women faculty that we knew and asked if they’d be interested in being mentors,’ she explains. There was overwhelming support, and now they have about 200 mentors. About 85% of mentees are PhD students, but Cossairt says sometimes early-stage academics are paired with more senior women. ‘Often, the person will come in with an idea of who they think might be a good fit and we’ll just reach out to that person and [ask them] “Would you be willing to join us?”… it’s usually an easy ask,’ says Cossairt. In all cases the one-to-one mentoring is driven by the needs of the mentee.

The international network Wisc (Women In Supramolecular Chemistry) has taken a slightly different approach. ‘Wisc started originally as some of us chatting about our lives and [offering each other] support,’ says Marion Kieffer, a chemist at Swiss pharmaceutical company InnoMedica. A more formal mentoring programme was therefore a logical step. They chose a group approach, ‘what we call circles,’ says Kieffer, who runs the programme for Wisc. ‘Usually two to four students [or postdocs], and then supervised by someone at one or two career stages ahead.’

The groups meet once a month, but mentees also benefit from informal interactions within the peer groupings who provide each other with advice, in some cases on a daily basis. Unlike some of the other programmes, Wisc uses male and female mentors. Kieffer thinks as well as providing thoughtful mentorship, this provides male academics with a window on the female experience in academia. ‘I had feedback from some mentors that they had no idea that there was such a difference between [the experiences of] female or male PhD students,’ she says. ‘So I think it’s important.’

As a professor at the University of Edinburgh, UK, Polly Arnold saw a real need for senior female scientists, who are often even more isolated than their more junior colleagues, to support and mentor each other. But she says she ‘didn’t want it to be anything that created additional extra effort for people’. So in 2017 she decided to set up a light-touch network called SciSisters, which simply provides a map showing where other women in similar senior roles are located across Scotland, to ‘allow people to see that they weren’t alone’. Members can then arrange to meet each other.

Now at the University of California Berkeley and the Lawrence Berkeley National Laboratory, Arnold says she sees the same need for women to help each other in the US. ‘Because people talk about it so much here, you might think from the outside that it’s all solved, but it’s absolutely not.’

While operating slightly differently, all the networks aim to provide support from those who have been through the same situations. ‘That’s the main part of the mentoring,’ says Kieffer. But she adds for earlier career stage chemists these programmes also provide role models so they know that senior female chemists ‘are not unicorns!’

A lot of the discussions are around the issue of work–life balance. ‘A lot of our mentees ask about having a family and taking career breaks, and having role models that have gone through that and have succeeded is quite helpful for them,’ says Kieffer. Imposter syndrome is ‘another really big one,’ adds Cossairt. ‘People just feel like they’re in an environment where they don’t belong and that’s another time where a mentor can play a good role.’ Hervey says talking through daily conflicts and micro-aggressions with someone who can relate to your experiences is another value of the programme: ‘Sometimes with male colleagues, they just say “Why can’t you brush it off?”… they don’t understand the emotional impact that little things can have.’

In many of the mentoring relationships the career advice is more tangible, such as encouraging mentees to be more ambitious and not accept the first thing that comes along. ‘It’s encouraging [them to] apply for a better position, so instead of going for another postdoc, to apply for a fellowship’ says Kieffer.

But according to Brian Uzzi, from the Kellogg School of Management and The Center for Science of Science & Innovation (CSSI) at Northwestern University in the US, there can be a downside to these types of mentoring programmes. ‘Sometimes networking can create a situation where people connect with mentors and use that opportunity as an affinity group to complain about problems rather than trying to solve them,’ he says.

Uzzi, who has studied mentorship in science, says that while ‘light touch’ mentoring networks can be very valuable, they are not a replacement for the very important early career mentorship that should come from a supervisor or direct manager. ‘From that mentor, you really need to acquire what people in my business call tacit knowledge … the sort of stuff that comes with sitting shoulder to shoulder with your advisor and writing a page of a paper together,’ he suggests. But he acknowledges that for women both types of mentoring are particularly valuable, ‘because they do face more challenges and barriers in their labour markets’.

Many of those now offering mentorship can look back at the mentors that made a difference to their careers. When Kieffer was a postdoctoral researcher at the University of Bristol, UK, she had a mentor through a departmental programme. ‘He gave me a lot of advice for looking into industry, even sent me some opportunities … I found it very helpful.’ ‘I wish I’d sought it more,’ says Arnold, who confesses she still suffers from a lack of self-confidence, even after career success.

All the mentoring networks provide some guidelines for their mentors. ‘I think the number one skill is being willing to really listen … empathy is huge when it comes to mentoring,’ says Cossairt. Arnold thinks that, in addition, there is a role for ‘championing’ junior women, such as nominating them for prizes or suggesting them for speaking opportunities. This is something mentors have done for her and she hopes to do for others. ‘Even with a good mentor, you still may not have the self-confidence to nominate yourself for a prize … you may forget that it’s all a game [or] you may not have the confidence to play the game,’ she says.

For the academics participating in women’s networks, the benefits are often more than providing or receiving mentorship. ‘I know of new collaborations that have been established, especially between academia and industry,’ says Hervey. Evidence from the life sciences shows that women co-author with other women and men with other men more often than would be expected from gender proportions in field. This could indicate women are seeking other women – or that they are being excluded by men. Either way, according to Kieffer, many female academics feel it is harder for them to form collaborations, and when they do collaborate with men they often feel a pressure to take on more of the administrative burden.

When you look around you and you see half of the room look like you, then maybe we don’t need a programme

Kieffer is sometimes asked about opening up Wisc’s mentoring circles to male students as well. But, she says, ‘we don’t have the capacity to run it for everyone’, plus some mentors have felt that if it were open to all, ‘it might not be such a special thing any more’. But Wisc and the other networks do open their conferences, workshops and networking events to all genders. The Swiss Women in Chemistry network invites mixed student groups to industry to meet with female chemists, for example. For Hervey this is equally helpful because it allows both male and female students to see female chemists in leadership positions. ‘It’s more about female representation, [and] just normalising it,’ she explains.

For Wisc, the network is becoming an entrenched community. ‘We have people that [have been] there since the beginning and some that have moved from being mentees to being mentors,’ says Kieffer. Hevey’s Swiss network is also growing in strength with more than 500 members on their LinkedIn group. ‘Just having a community within Switzerland has been really special for us,’ she says.

For some, the hope is that women’s positions will improve to the point that these networks will become obsolete. ‘When you look around you and you see half of the room look like you, then maybe we don’t need a programme,’ says Cossairt. But we are not yet near that point and Kieffer thinks there may always be a need for women to support each other, as they will always have to deal with the impact of pregnancy and career breaks.

In the meantime, the mentorship of other women is a valuable support for female chemists at almost all career stages. ‘The advice I would normally give people is get more than one [mentor],’ says Arnold, ‘different people for different things … and do seek [mentorship] out, don’t expect people to come and offer it.’