It's not all personalised number plates and designer sun glasses; there's a serious side to PR too, discovers Sarah Houlton

It’s not all personalised number plates and designer sun glasses; there’s a serious side to PR too, discovers Sarah Houlton 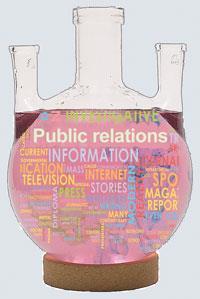 PR might conjure up images of vacuous fluff, but good PR is not like that at all, and can provide a rewarding career path for chemists. Big companies and universities have press offices that put out press releases and respond to requests from journalists and, in science-related areas, a background in chemistry is a real plus.

It makes for a varied working life, too. Catriona Kelly studied industrial chemistry at the University of Paisley, UK, and, after jobs on several chemistry-related magazines and a spell on a newspaper, now works in science and engineering PR at the University of Edinburgh. ’The job is a mixture of writing press releases and responding to requests,’ she says. ’The phone rings, and you never know who’s going to be on the end - it might  be a newspaper asking for expert comment or a magazine following up on a press release, last week I even had someone asking about some of our bees that had been stolen!’

The science background is very helpful, she says, even when the subject is well out of her comfort zone. ’I understand the scientific method and the mindset of scientists, but because I deal with people from such a range of disciplines I can get out of my depth with the high-level science,’ she says. ’This can be a good thing - if I can explain it, then the public is more likely to understand. For example, I worked with Peter Higgs when the Large Hadron Collider opened - they’re hoping to find the Higgs boson - which was both fascinating and challenging. I get to work with some really interesting people doing incredible things.’

Something a little different

Specialist PR agencies also offer a potential career for chemists, as many work for companies whose business is rooted in science. One of these is Manchester-based Barrett Dixon Bell, whose clients range from food ingredients companies to analytical instrumentation and lab services providers, and this is where James Parker developed his PR career.

Having left school at 16, he joined Zeneca Pharmaceuticals as a trainee chemist, gaining a degree in applied chemistry from Manchester Metropolitan University on day release. A desire to do something a little different took him to personal care company EC DeWitt, generating analytical data for claims substantiation. He spent more and more time with the marketing team, it piqued his interest, and he moved to Barrett Dixon Bell.

’We specialise in trade and technical press,’ he says. ’Our services include copywriting for press releases and technical articles, along with marketing activities from sales literature and advertising to event management. My chemistry background and experience in industry was really useful, as I learnt to translate technical information into layman’s terms. It’s quite a skill to be accurate but not confuse people.’ Parker is about to go full circle and into another field of PR - the internal communications team at AstraZeneca. ’I know the company culture, and I’ve learnt how to do marketing communications, and now I’m going to put the two together,’ he says.

Like Kelly, Jacky Cheng went from a chemistry degree to journalism, and then into PR. After a master’s degree in chemistry from Tongji University in Shanghai, China, he found a job in the Shanghai office of a Swiss publishing company, editing plastic and rubber magazines. The relationship he formed with a Dutch PR agency, EMG, led to him setting up a Shanghai office for them in 2004. ’It was challenging butenjoyable - as well as PR, I everything from finding an office to recruitment!’ he says. ’We started off with chemical companies as clients, as EMG is strong there, but gradually we moved into other sectors, such as packaging, automation and semiconductors.

Earlier this year, he moved on again, to set up a Chinese office for the Scott Partnership, a Cheshire-based business-to-business PR consultancy. ’I started from one person again, and now there are six in the office,’ he says. ’The aim is to develop international clients, and assist western companies do PR here in China.’

He says his chemistry knowledge has been invaluable, especially in gaining credibility when working with new clients. ’It’s a great help in understanding new products,’ he says. ’In a business-to-business communications consultancy, it is always good to have some technical knowledge, and I try to recruit people with an outgoing personality and a technical background.’