Jobs in science centres and museums are hard to come by and competition is fierce. The work requires bright, enthusiastic and imaginative people, reports Emma Davies

Jobs in science centres and museums are hard to come by and competition is fierce. The work requires bright, enthusiastic and imaginative people, reports Emma Davies

You have to be a total show-off to do my job,’ laughs Sue Halliday, education manager at Catalyst Science Discovery Centre and Museum in Widnes, UK. She throws herself into her job, even doing ’living history’ guided tours dressed in Victorian costume. Catalyst, part of which is housed in a former soap factory, opened in 1989 as the Museum of the Chemical Industry at a time when the industry was thriving in the region. The industrial presence in the area has shrunk dramatically but the science discovery centre is working harder than ever to inspire school children and the general public, and to open their eyes to chemistry careers.

Halliday started her working life as a pathologist before re-training as a teacher. She was offered a school headship but turned it down to take a career leap to the centre, after being spotted by one of its trustees. Halliday initially asked for a six-month trial. Six years on she still truly loves her job. ’It has been a new lease of life for me,’ she enthuses. Part of her job is to be the link between the school curriculum and industry. The centre offers a lot of hands-on activities and has its own laboratory, all of which Halliday coordinates. 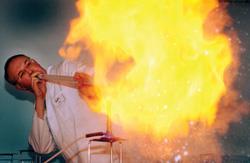 Noel Jackson from the Centre for Life in Newcastle, UK

Noel Jackson, head of education at the Centre for Life in Newcastle, UK, also worked as a school teacher for many years, having trained as a chemist. ’This is the job I have been training myself for since I was at school - without knowing it,’ he says. ’We look at ways to find the excitement in science to inspire people. People talk about making science exciting, which is a phrase that I refute. Science is exciting.’

The centre has three laboratories and runs myriad hands-on activities and workshops. It also trains academics to talk to the public and is involved in teacher training. It employs eight full-time science explainers, who are all recent science graduates. Competition to get a position as an explainer is tough. Applicants need a good degree and, ideally, performing skills and experience of working with children. About a third of the explainers go on to become science teachers, while another third go into research. Some find work in science communication.

Catalyst and the Centre for Life receive no government funding. The Centre for Life runs a conference and banqueting business, the surpluses of which are covenanted to an educational charity which runs the centre. Catalyst is funded through its visitors and industry sponsorship.

Making it in a museum

The Centre for Life has no curatorial responsibilities. London’s Science Museum, meanwhile, has a mix of museum exhibits and hands-on science. ’Competition for posts is strong and some vacancies, for example for curators, effectively only come up once a decade or so,’ says Peter Morris, curator of chemistry at the Science Museum.

Unlike the Natural History Museum next door, the Science Museum does not do scientific research. ’The Science Museum has no specific need for chemists with the exception of the chemistry curator, but chemists can find several positions which make use of their chemical expertise one way or the other,’ says Morris.

At the British Museum, meanwhile, chemistry skills are put to good use in the research laboratory. Many of its researchers have postgraduate qualifications in chemistry or physics and a multidisciplinary approach is much valued, says Andrew Meek, a research scientist currently working there. Meek himself has a degree in archaeology, an MSc in archaeological materials and a PhD on the chemical analysis of glass. Most of his time is spent ’chemically analysing ancient glass, glazes and enamels in an attempt to answer questions on their production for curators and conservators at the museum’.

There are opportunities to travel. ’All of the scientists working here are involved in some way in research projects with foreign museums,’ says Meek. ’As no museum has every piece of analytical equipment there are a lot of projects where it is necessary for scientists to move around to get the results they need - or indeed particular expertise. Also, it is often necessary to collaborate with other museums that have artefacts which compliment those held at the British Museum.’

With funding cuts, it is ’perhaps rather harder to find a permanent job,’ says Meek. ’But there are many opportunities for short-term contracts for scientists looking to move into the museum sector and increasing numbers of research contracts,’ he adds. ’There are also a number of fellowships aimed at bringing new people - and perspectives - into the field.’

Scientists can also look to volunteer at some museums and science centres. ’We couldn’t run without volunteers,’ says Halliday. ’We always need volunteers.’