Thinking outside the blocks

Growing up in Gouda, the Netherlands, Ellen Kooijman was fascinated by astronomy. But her interests took an Earthward turn when she was deciding what to study at university and stumbled across geosciences. ‘It’s not a common subject in the Netherlands – there are no mountains and hardly any rocks – but I was immediately enthusiastic about combining physics, mathematics and chemistry to understand the Earth,’ she recalls. 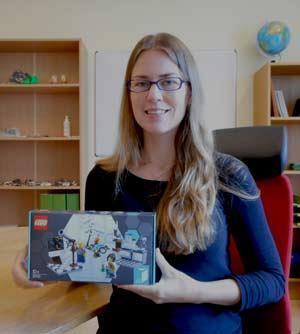 Since then, Kooijman’s research has taken her all over the Earth she studies.

After completing an MSc in Earth sciences at the University of Utrecht, Kooijman was eager to continue in academia and so jumped at the chance to do a PhD with renowned geochemist Klaus Mezger at the University of Münster, Germany. Her research focused on U–Pb dating of zircon and rutile using laser ablation inductively coupled plasma mass spectrometry (LA-ICPMS).

Kooijman stayed on in Münster as a postdoctoral researcher for another year while she considered her next move. ‘I was keen to go to the US to broaden my horizons,’ she says, and so secured a research position at the University of California Santa Barbara, which has a state-of-the-art LA-ICPMS laboratory. Two years later, she returned to Europe to become a senior researcher in the department of geosciences and director of the Vegacenter at the Swedish Museum of Natural History in Stockholm.

‘When I first saw my current position advertised, I wasn’t sure if I would be considered “senior” enough, at age 30,’ she admits. But her unique experience and qualifications managing LA-ICPMS facilities made her the perfect candidate.

Over the past 18 months, Kooijman has built a national laboratory for micro-analysis in geosciences from scratch, which has been quite challenging. ‘Getting the lab space, the ventilation and the instruments just right is a very large effort and takes a lot of time,’ she admits. ‘However, it is also a unique opportunity and enables me to build a lab according to my own vision. Seeing it approaching completion is very rewarding.’

Kooijman has also recently designed a lab on a much smaller scale – a new Lego set called the Research Institute, featuring three women scientists: a paleontologist, a chemist and an astronomer. It all began in April 2012, when Kooijman discovered Lego Ideas – a web site that invites Lego fans to propose projects and gather other fans’ support by building models to showcase the idea. If a proposal passes the threshold of 10,000 supporters, it is reviewed by the Lego Review Board, which hand-picks projects to become new Lego sets. ‘As a Lego fan I was immediately enthusiastic about being able to suggest my own idea for a set,’ she explains. 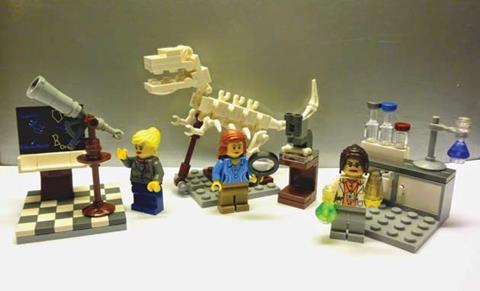 ‘I had seen the scarcity of female figures in interesting professions in the available product range, so I decided to do a project about that,’ Kooijman continues. Her idea took off, and when Lego decided the idea would become a product, she also had a say in the final design. ‘The highlight of the journey was a visit to the Lego Headquarters in Billund, Denmark,’ she says. ‘I got to meet the team involved in making the set and went on tours through the private Lego museum and factory.’ Another of Kooijman’s scientifically inspired projects, a set based on the popular US sitcom The Big Bang Theory, is currently under review.

As soon as the Research Institute hit the shelves in August 2014, the female scientist figures started making headlines, and the limited production run quickly sold out. Donna Yates, an archaeologist at the University of Glasgow, uses the Research Institute to recreate the highs and lows of academic life on her @LegoAcademics Twitter account; she gained 15,000 followers in one week following her first tweet. Clearly, the Research Institute academics have struck a chord with other scientists. So does Kooijman consider them to be good role models? ‘I think displaying women in science in a popular toy can help convey the message to both girls and boys that it is perfectly normal for women to have these types of careers,’ she says.

Diversity is also what Kooijman values most in her own job. ‘I love working in the lab, but I also enjoy travelling for fieldwork and going to conferences,’ she says. Her fieldwork has taken her to some spectacular locations, from the Eastern Ghats Belt in India to the Sierra Nevada in Spain. ‘No two days are the same and the whole process of doing research is extremely exciting,’ she says. And now that her own lab is nearly finished, ‘I’m looking forward to receiving the first guests,’ she smiles.