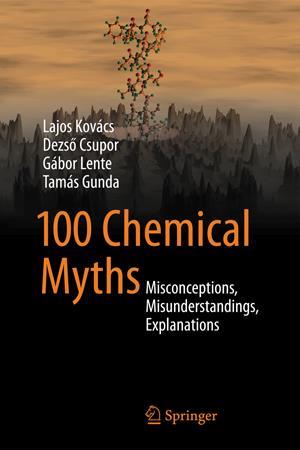 You may have heard that spinach is good for your health due to its high iron content or that ice skating works because of the pressure-induced melting of the ice under the blades. Sadly, these memorable explanations aren’t quite true. While pressure helps with skating it is neither necessary nor sufficient to explain the effect. Spinach doesn’t really contain that much iron, and even the origin of this tale is mythical.

In their book, first published in Hungarian in 2011 and now available in English, Lajos Kovács and colleagues set out to debunk 100 such myths and misconceptions. Most of them don’t involve nearly as clear-cut contrasts between scientific fact and what many people believe as the above examples. Thus, many of the chapters come across as collections of scientific facts on vaguely consumer-relevant topics such as food additives or medicines.

What the authors failed to consider is the reason why certain misconceptions so stubbornly stick in people’s minds. Many of them do so because they tell a simple, memorable story. There are two things that science communicators can do to stem the flood of such misinformation. We can tell the story of how the myth came to exist. Sometimes, such as in the case of the iron in spinach, the debunking story itself is flawed as well, leading to Russian doll style myths.

When the origin of the myth is unknown or uninteresting, we just have to make the truth a more interesting story. Sadly, the authors make little attempt at creating compelling narratives. Their approach of just stating that what people think is wrong, followed by a dumping of scientific facts, won’t win over people who like to believe in myths and just-so stories.

Still, thanks to its detailed bibliography, the book is handy as a reference for those who have doubts concerning a particular viral factoid or who want to cure others of specific misconceptions.