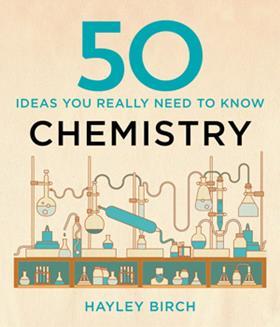 I am not a scientist. My wife, the daughter of a chemistry teacher, and most of her friends are scientists and sometimes I wonder what all the fuss is about – then she handed me this book.

Hayley Birch’s 50 chemistry ideas you really need to know provides an engaging and concise overview of the subject for novices, like me. Motivated by her observation that chemistry is the ‘underdog’ of the sciences, perceived by the masses to be less relevant than biology and less interesting than physics, Birch has won me over.

The book discusses 50 ideas in 50 4-page chapters, starting with the fundamentals: atoms, elements, isotopes and compounds. Each new idea builds on previously imparted knowledge, yet is discussed sufficiently in isolation that the reader does not necessarily need to read in the set order so I easily dipped in and out of the book.

References to pop culture, such as dissolving dead bodies in bath tubs in Breaking bad when explaining superacids (apparently the properties of hydrofluoric acid are exaggerated for dramatic effect), and practical applications of chemistry, such as how the invention of synthetic plastics led to improvements in packaging to maintain the freshness of crisps, make each of the 50 ideas accessible. Each chapter has a timeline that provides further context.

While I initially found myself drawn to chapters on graphene and 3D printing, concepts I know to be cutting edge, I also discovered and learned about more obscure subjects, particularly chirality in molecules. There is a real skill in pitching each idea at the right level for the audience and Birch manages to avoid being patronising throughout.

Ultimately, if the author’s aim is to change the image of chemistry, then success will rely upon the ability of the publisher’s marketing department to entice sales from casual readers. However, those curious enough to purchase this entertaining book may also reach Birch’s conclusion that chemistry really is the best science. And if you yourself don’t need convincing about the importance of chemistry then this is the book to recommend to your non-scientist pals.

Purchase 50 chemistry ideas you really need to know from Amazon.co.uk