Protein cation is strongest organic acid ever made 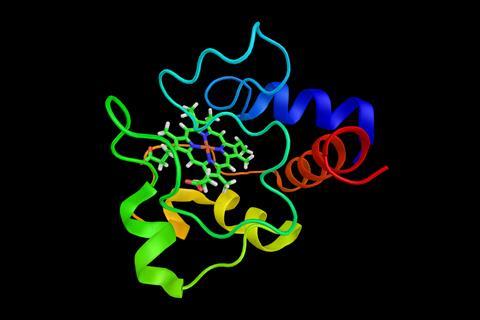 Highly charged proteins now hold the world record for the strongest organic acid. Australian researchers discovered that they can protonate even inert gases like argon.

William Donald from the University of New South Wales and his team have detected the supercharged, superacidic ions while investigating how protein ions form during electrospray ionisation. In this mass spectrometry technique, a voltage applied to a liquid creates an aerosol containing often multiply charged ions. But in the presence of the supercharging agent 1,2-butylene carbonate metalloproteins cytochrome c and myoglobin take on a large number of hydrogen ions. The proteins form highly cationic compounds with +23 and +30 charges, respectively.

Reactions within the mass spectrometer reveal that these proteins protonate even unreactive compounds such as argon or nitrogen. The ions’ gas-phase basicities, which measure how easily a compound accepts an additional proton, are the lowest ever found in organic molecules, superseding the previous record holder tetrafluoromethane.