Interest for testing from L’Oréal, BASF and Procter & Gamble could be a stepping stone towards bespoke organs

3D bioprinting’s allure has attracted blooming interest from the skincare industry, with three leading firms each launching skin printing initiatives in mid-2015 that they hope will revolutionise cosmetic testing. The initial challenge is making skin slivers for new product experiments conducted in multiwell analytical plates, but success could lead to much grander schemes. The expertise gained could feed into pharmaceutical research, and even help enable patients’ own cells to be made into almost perfectly compatible skin grafts and eventually replacement organs.

Two projects are partnerships with startups: L’Oréal’s US-based global technology incubator has joined forces with Organovo in the US; and German-headquartered BASF with French firm Poietis. Meanwhile, US consumer products giant Procter & Gamble has invited research proposals from Singaporean academics within a five-year S$60 million (£27.4 million) programme with the country’s Agency for Science, Technology and Research (A*Star). 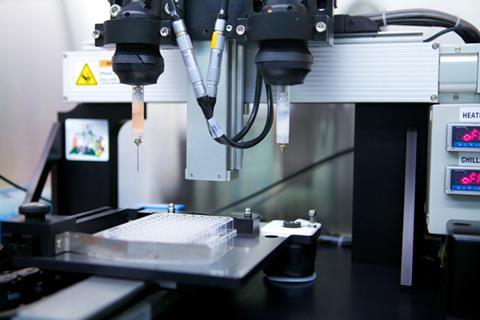 Today skin tissue is routinely grown in cell culture, explains Priya Viswanathan from King’s College London, but producing a centimetre-square piece can take up to four weeks. Using the same initial cells, which for lab testing purposes are typically donated by plastic surgery patients, 3D printing can potentially do the same in less than a day. Skin is a multi-layered organ with different cell types, and 3D bioprinting is well suited to depositing cells in that arrangement. ‘You still need to grow the cells, but printing in a multilayer format you wouldn’t need to culture it additionally for that much longer,’ Viswanathan says.

Bioinks for 3D printing can be created by dispersing cells in a standard culture medium. Any printing technology could theoretically then be used to deposit them, Viswanathan explains, making experiments relatively cheap and easy. However, dedicated tools are likely to deliver better results, making them especially attractive if they’re affordable. ‘The lower the cost of the manufacturing and the better the resolution of the printer, the easier it is to take into biological applications,’ Viswanathan underlines.

Challenges inevitably accompany these benefits. The hurdles that stand in the path to skin with full natural functionality include preventing the heat generated in the printing process damaging cells’ health, or viability. It’s also ‘extremely difficult to print the entire complexity of any organ or tissue including the vasculature’, explains Viswanathan, because real tissue needs biochemical inputs including growth factors and cytokines. ‘We rely on the fact that cells produce these themselves, which is good but means that you’re missing a lot of the key ingredients,’ she adds. Additionally, natural tissues combine different types of cell, giving printers a tough choice between simplified single cell-type or complex multiple cell-type processes. 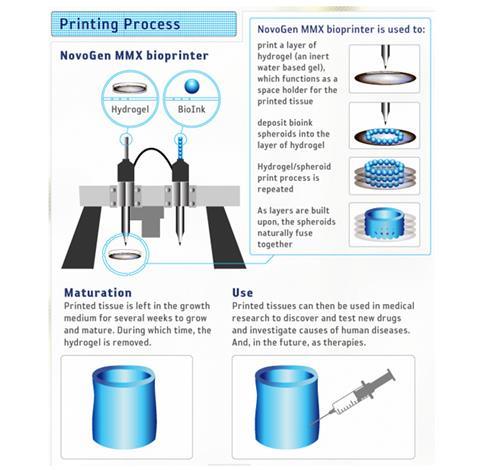 Organovo aims to use its 3D printing method to create a convincing version of cells’ natural growth microenvironment. ‘Our goal with each of our tissues is to recapitulate the biochemical production of proteins and enzymes, the gene expression and histology of native tissue,’ says Michael Renard, Organovo’s executive vice president for commercial operations. ‘Our technology allows for the precise control of the spatial relationships between various cell types to mimic the form and function of native tissue.’

The company’s approach, built on research originating from the University of Missouri’s Gabor Forgacs, uses an ink of cultured cells, formed into spheroids. Its printer deposits ink via a capillary tip with one print head into layers of hydrogel dispensed with a second print head. The spheroids naturally fuse together and are left to grow for several weeks, over which time the hydrogel is removed. Organovo has previously produced nerve guides, blood vessels, lung tissue and cardiac sheets or patches. ‘We have already built multi-layered skin consisting of dermis and epidermis layers,’ Renard adds. Organovo’s partnership with L’Oréal involves developing 3D printed skin tissue for product testing and other areas of advanced research, ‘building new breakthroughs in skin modelling’.

Reflecting the importance of self-organisation as printed tissue matures, Poietis calls its approach ‘4D bioprinting’, where the fourth dimension is the architecture that evolves between printing and readiness. To make the first three dimensions it coats cells and surrounding materials, such as hydrogels or collagen, tens of micrometres thick onto glass slides. The bioprinter uses a laser to detach picolitre droplets from the slides, depositing them with high precision and resolution, according to Bertrand Viellerobe, the company’s chief technology officer.

3D printing skin could revolutionise grafting operations, Viswanathan highlights, using a small sample of cells to cover a large area and changing the medical procedure itself. ‘You have the ability to print cells very quickly onto the wound site, and enable its repair much faster,’ she says. She highlights research on printing skin directly onto burns at the US Armed Forces Institutes of Regenerative Medicine, led by Wake Forest University in Winston-Salem, North Carolina. ‘Because this has to be used in combat the technology is portable,’ she underlines.

And unlike some biotechnological innovations, using 3D bioprinting to provide replacement body parts using a patient’s own cells is relatively popular, asserts Viellerobe. Consequently, alongside its conventional startup funding, Poietis is seeking to raise €600,000 (£436,000) through crowdfunding by early October. ‘Everyone can understand and see that it will be useful for healthcare,’ Viellerobe says. ‘If someone has had cancer and part of their skin has been removed, you can take other cells from the patient and make very similar tissue in terms of colour, hair follicles, and vascularisation. Maybe you won’t even see where the graft is. The ultimate vision is to print every type of cell with very high precision to make every type of tissue or organ.’