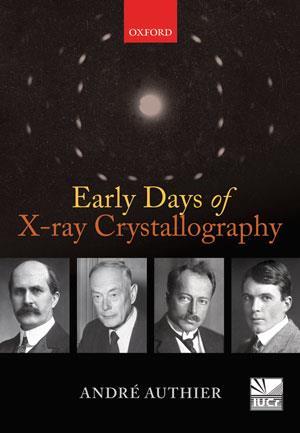 Time travel with me back to March 1912. Wilhelm Röntgen has discovered x-rays some seven years earlier, but their nature is still unknown. Some interpret their properties in terms of a ‘corpuscular’ theory, while others see them more as electromagnetic waveforms. The internal composition of crystals, too, is perplexing: is sodium chloride some solid combination of ‘molecules’ of NaCl or are the particles (atoms or ions) arranged in a lattice somehow?

A month hence, Max von Laue will project a narrow beam of x-rays on to the face of a crystal of copper sulfate and observe a ‘considerable number of deflected rays’. This discovery, the first x-ray diffraction pattern, will change chemistry; for the first time scientists will have insights on the internal atomic make-up of crystals.

William Lawrence Bragg will realise that the diffraction pattern means x-rays must be a form of electromagnetic radiation, and a year later, the Braggs will publish their famous law, n? = 2dsin?. In 1915, they will be awarded the Nobel prize in physics.

This book can be enjoyed on two levels. Readers who are mathematically inclined x-ray crystallographers will appreciate the rigour of the author’s approach, but others (like this reviewer) will still get a sense of the excitement of the period: how structure after structure yielded its secrets, how Henry Moseley established the concept of atomic number, and much more.

A considerable portion of the book (130 pages) is devoted to a history (starting with Aristotle) of the nature of crystals. The book is also liberally illustrated with informative, but rather brief, biographies of the workers in this branch of science. Perhaps if the author is tempted to take up his pen again, he might consider providing yet more details of the personalities of these scientists and, of course, their contributions.