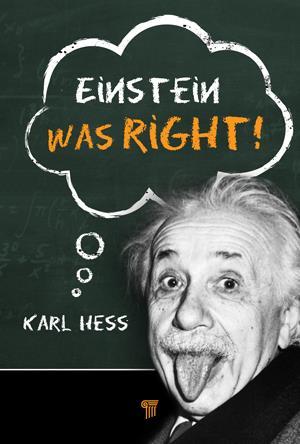 When I was studying physics at university, lecturers always decried Albert Einstein for attempting to dispel some of the more exotic concepts of quantum mechanics. Why did he attempt to break out from his past glories and risk damaging his reputation by tackling the ‘new kid on the block’? The answer to this has always seemed elegantly simple to me. He was a scientist trying to gain an understanding of a world he didn’t recognise any more.

In his new book, Einstein was right!, Karl Hess attempts to understand Einstein’s motivations for criticising quantum theory and how, in the end, he was right to do so. Hess neatly outlines how Einstein feared a quantum world governed by probability and, in his attempts to challenge it, jousted with quantum heavyweights Niels Bohr and John Bell.

Many books on this topic tend to either lose the reader in a mathematical maze or paint a picture with the broadest brushstrokes possible. Hess manages to strike an incredible balance, however. From the outset he candidly states to the reader that explaining such a complex subject is rather difficult without the use of some very basic mathematics. But he doesn’t fall into the trap of relying on maths wholeheartedly to express his views. He continuously engages the reader by tackling concepts many have seen popularised throughout pop culture such as teleportation and space-time.

Hess also allows the reader to peer behind the curtain by ruminating on how his own life experiences have shaped his scientific outlook. In some instances, these autobiographical moments run the risk of overshadowing the science but, ultimately, they give added context to Hess’ keen interest in the subject.

I admire Hess’ bravery in tackling a subject renowned for its infinite complexity – it’s a trait he clearly shares with the human subject at the heart of his book.

Purchase Einstein was right! from Amazon.co.uk